During our visit to the Canadian Rockies in the summer of 2017 we had an opportunity to explore three national parks: Banff, Jasper and Yoho. It likely goes without saying, but the Canadian Rockies are extremely beautiful. In fact, some of the hikes we took on this trip were some of the most scenic hikes we’ve ever taken in our lives (see list of hikes we took below). For me personally, perhaps the Paradise Valley in Mt. Rainier National Park is the only hike that would rival hikes such as Parkers Ridge, Iceline Trail, Wenkchemna Pass or Lake O’Hara. These four hikes in particular were simply epic - with scenery so incredibly beautiful that we walked in constant awe.

In this overview I wanted to provide you with a few observations from our trip. First of all, I should say that Canadians are very friendly people. We really appreciated that aspect of our visit. If you're considering a trip to this region, however, you may want to note that food and lodging are fairly expensive. With the favorable exchange rate that has existed over the last several months, however, we were pretty fortunate to catch a bit of a break on costs during this trip. 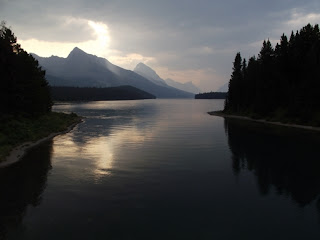 Trails in all three parks were extremely crowded. We were a little perplexed as to why there were so few trails in both Jasper and Banff. It seems that these parks could easily disperse the crowds by building more trails along the long Icefields Parkway and Trans-Canada Highway corridor, which stretches roughly 180 miles between the towns of Banff and Jasper. Perhaps Parks Canada is trying to keep the majority of those two parks as pristine as possible, or perhaps they find it’s easier to manage the masses that visit the parks by confining them to only a few trails. Who knows? If a degree of solitude is important to you, however, I highly recommend starting your hikes as early in the morning as possible.

Our group found that road and trailhead signage was very bad, especially when compared to American parks. In some cases the signage was confusing, while in others it was simply non-existent. Several times we had to guess where the trailhead was, or where the trail proceeded. We also noticed quite a bit of illegal trail cutting on switchbacks. This isn’t necessarily the fault of Canadians, as there were many people from all over the world visiting these parks, many of whom looked to be new to hiking. One day near Sentinel Pass we ran into a volunteer who was asking hikers to stay on the trail and to avoid the various social trails.

We were also very perplexed as to why we saw hardly any wildlife during our two-week trip to the region. Over the course of all of our hikes we saw only one golden eagle, one pine marten (a first for all of us), one marmot, one grouse, a couple of pikas, a couple of Barrow’s goldeneye ducks, and one deer standing along the road in the town of Banff. We don’t know if that’s normal or not, but we were pretty disappointed from that standpoint. That’s not to say there isn’t a lot of wildlife out there. You absolutely still need to be aware that you’re hiking in grizzly country while in the Canadian Rockies. In fact, on many trails Parks Canada requires visitors to hike in groups of at least four (we visited with two other family members).

Unfortunately smoke was very much a part of our trip. The summer of 2017 was a terrible wildfire season in the Canadian Rockies and the American Northwest, and as a result, heavy smoke filled the region for several weeks. We knew up front that smoke was going to be a major issue. In fact, we almost cancelled the trip after looking at some of the webcams in Lake Louise. Some days were sparkling clear, while others smoke completely obscured the surrounding mountains. We decided to move forward with our plans anyway, knowing the possible consequences. Although we experienced a couple of bad days and a couple of marginal days, the good days outweighed all the others. We saved the most scenic hikes for those days when smoke was predicted to be of little or no consequence.

In case you're planning a trip to the Canadian Rockies someday, I wanted to mention here that there were a couple of hikes we didn’t get a chance to do as a result of the smoke. These are hikes you may want to put on your radar should you ever decide to visit the region: Edith Cavell Meadows, Fairview Mountain, Wilcox Pass and the Emerald Lake Triangle, which includes Yoho and Burgess Passes.

The following hikes are listed in order from most scenic (favorites) to less scenic. Keep in mind that some of the hikes towards the bottom were heavily impacted by smoke, thus biasing my thoughts on those hikes: