There are several locations where hikers can access the Sentinel Meadow & Cook's Meadow Loop. We chose to begin our hike from the Sentinel Bridge parking area, located just behind bus stop 11 on Sentinel Drive.

The absolute best time to hike this easy loop is during the spring and early summer months when the meadows are lush green, Yosemite Falls is thundering down the valley wall, and the wildflowers are blooming. As you walk through the meadows keep an eye out for shooting stars, western azalea, pine violets, evening primrose, baby blue eyes, larkspur, goldenrod and woolly mule-ears, among many other varieties. 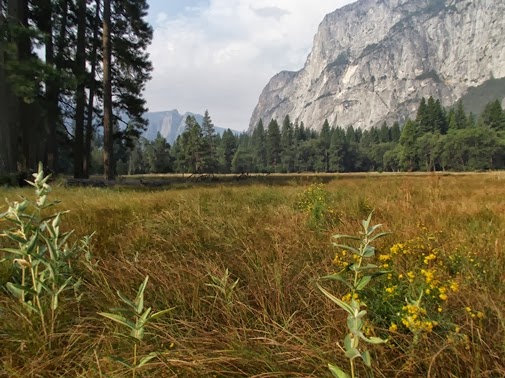 The hike begins by following the Cook’s Meadow Loop trail northward until it crosses over Northside Drive. As you might expect, the views of the Yosemite Valley are outstanding here. During the spring and summer the meadow is carpeted in wildflowers. You’ll also have an excellent chance of seeing deer – we saw several throughout the day. 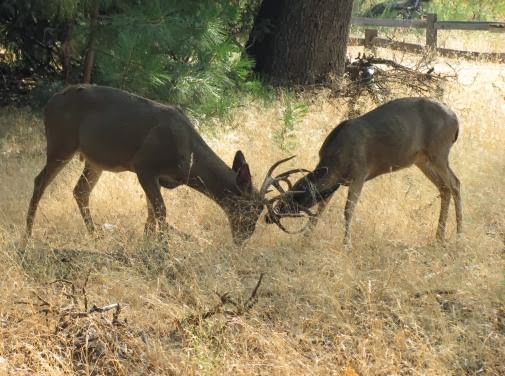 The loop then makes a left turn and crosses over Village Drive. Here you’ll begin following the paved path alongside Northside Drive. The unfortunate aspect of this otherwise wonderful hike is that you’ll have to contend with noise from traffic and buses along much of the route.

Just before reaching bus stop 6 you’ll arrive at the Lower Yosemite Fall Trail junction. Take a right here to visit one of the tallest waterfalls in the world. Yosemite Falls drops 2425 feet in three separate sections, and depending on which source you want to believe, is anywhere between the 5th tallest and the 20th tallest waterfall in the world.

During our visit the waterfall was completely dry. Because it’s fed by snowmelt, peak flow usually occurs in late May, and usually stops flowing altogether by late August. 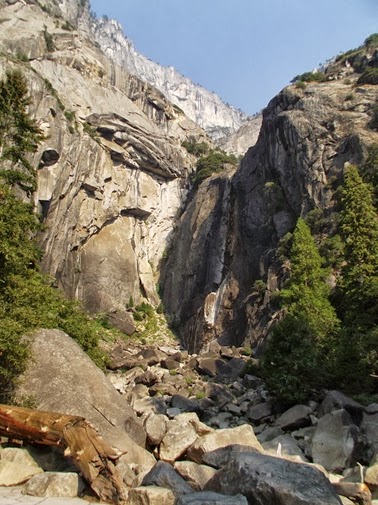 The Lower Yosemite Fall Trail makes a semi-loop to an up-close viewpoint of the lower fall, and then exits on the west side of bus stop 6. The trail passes through a very pleasant forest, and is a nice diversion from the noise of the road. However, I imagine when the falls are flowing it gets pretty crowded here.

After leaving the Lower Yosemite Fall Trail you’ll cross over Northside Drive and begin heading over towards the Yosemite Lodge. When you get into the village there will be a residential area for employees on the left. Look for a bike path that veers off to the left before you get to the lodge. There won’t be a sign indicating that it’s a bike path, but it’s the only such trail in the residential area. From here the paved path traverses along the southern edge of the lodging area, before taking you into the heart of Leidig Meadow where you’ll have some outstanding views of the western end of the valley, including Sentinel Rock and El Capitan. Sentinel Falls, at 2000 feet and among the world’s tallest waterfalls, is also visible from this meadow. Despite its height it has a relatively low flow, and is usually dry by July.

The prominent view to the west is known as the Gates of the Valley. On the left are the Cathedral Spires, and to the right is El Capitan, the largest exposed granite monolith in the world. Climbers from all over the world come to scale this vertical rock that towers 3593 feet above the valley floor. 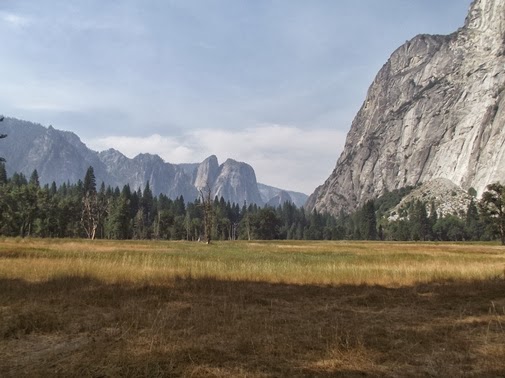 Soon the trail reaches the Merced River where you’ll cross over the famous Swinging Bridge. The views looking upstream towards Yosemite Falls and the eastern end of the valley are simply sublime – even when the falls are dry. 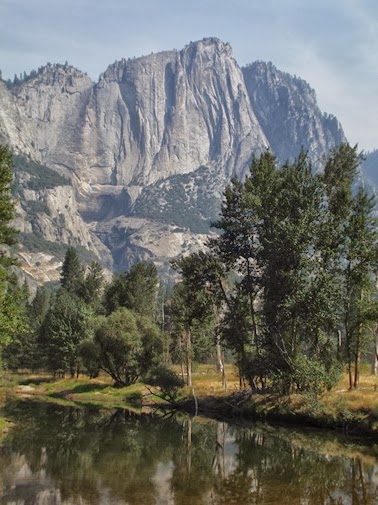 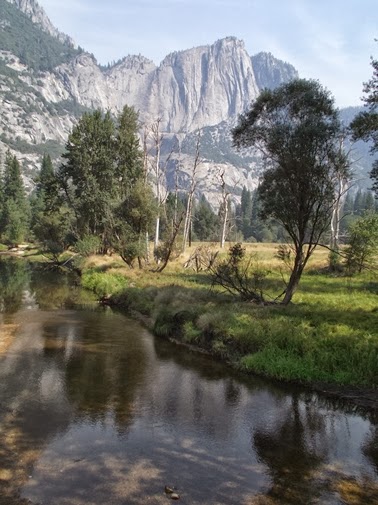 At the beginning of 1997 the park experienced its worst flood ever. As the Merced reached a crest of 23.4 feet, it destroyed roads and buildings that resulted in $178 million in damage, and stranded 2100 park visitors for several days.

Once you cross over the bridge the trail begins heading east along Southside Drive. This section of the loop also provides outstanding views of Yosemite Falls during the spring and early summer months. The meadow to the north of the road here is known as Sentinel Meadow. 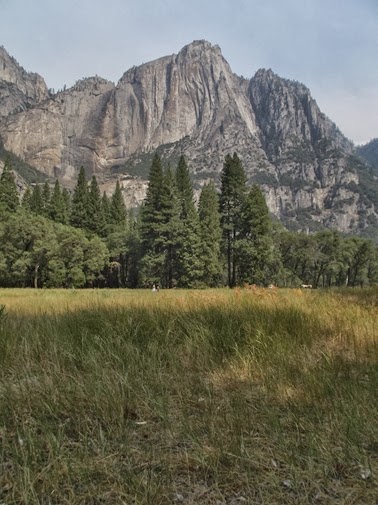 Continue to follow the paved bike path all the way to the Yosemite Chapel, which is located near the Sentinel Drive junction. Built in 1879, the chapel is the oldest structure in the Yosemite Valley. 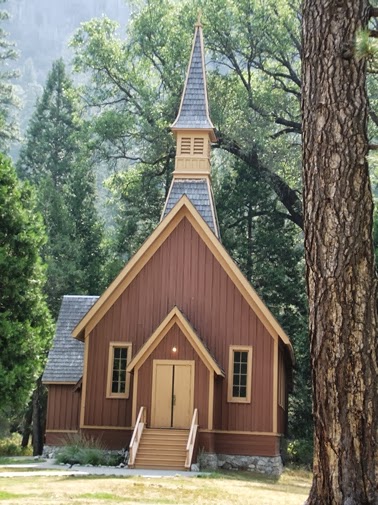 Roughly 35 yards beyond the chapel you’ll reach the Cook’s Meadow Loop trail. As the name would imply, the trail ventures into the heart of Cook’s Meadow. Once again you’ll cross over the Merced River, and soon will reach another trail junction where you’ll take a right to return back to the Sentinel Bridge parking area. 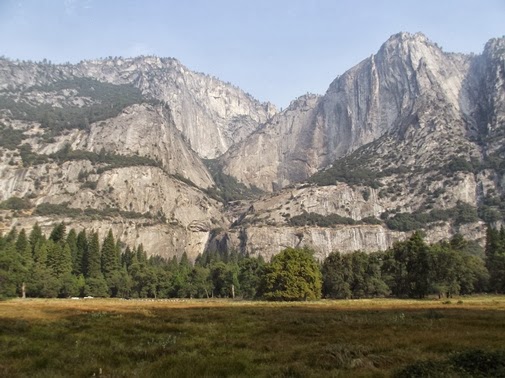 The Cook’s Meadow Loop travels over a raised boardwalk, which was put in place to enhance water flow, and ultimately return the meadows to more of a wetland environment and prevent the further encroachment of trees.

From Cook’s Meadow you’ll have some great views of Half Dome towards the east. This iconic granite monolith rises almost 5000 feet above the valley floor. In his Report of the Geological Survey of California, Josiah D. Whitney said that Half Dome "presents an aspect of the most imposing grandeur; it strikes even the most casual observer as a new revelation in mountain forms; its existence would be considered an impossibility if it were not there before us in all its reality..."

John Muir described the granite monolith in his own unique way: "The great Tissiack, or Half-Dome, rising at the upper end of the valley to a height of nearly a mile, is nobly proportioned and life-like, the most impressive of all the rocks, holding the eye in devout admiration, calling it back again and again from falls or meadows, or even the mountains beyond..." 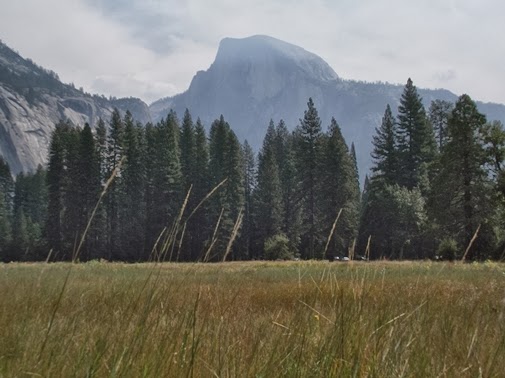 We happened to hike this loop during the height of the Rim Fire, which burned more than 257,000 acres along the western edge of the park during the summer of 2013. Without a doubt the smoke and haze from the fire greatly impacted our views, which you may have noticed in some of the photos above. Speaking of photographs, if you wish to go home with some great shots of the valley, I highly recommend hiking this trail in the early morning or late in the afternoon.