“If I were so time-poor as to have only one day to spend in Yosemite I should start at daybreak, say at three o'clock in midsummer, with a pocketful of any sort of dry breakfast stuff, for Glacier Point, Sentinel Dome, the head of Illilouette Fall, Nevada Fall, the top of Liberty Cap, Vernal Fall and the wild boulder-choked River Cañon.”

Many of those places described by John Muir in the quote above are found along the Panorama Trail. In fact, Muir may very well have hiked this trail himself, as it's one of the older trails in the park, having been constructed in 1872. Today the Panorama Trail is still considered to be one of the premier hikes in Yosemite National Park.

Visitors will have a couple of options with regards to hiking the trail. If you have two cars in your party you can park at both ends of the trail for a one-way hike. You can also take the Glacier Point Tour bus, which provides hikers with a one-way shuttle. This option will allow you to take the bus up to Glacier Point, and then return back down to the valley via the Panorama Trail. You could also hike up the trail and then catch the bus on your return trip to the valley. There is a fee for this service.

You can also combine the Four Mile Trail and the Panorama Trail for a spectacular 12.6-mile, one-way hike. This was the option we decided to go with.

If you do decide to combine the two trails, the free shuttle service in the valley can be used to bridge the gap between the two trailheads. You may also want to note that you can purchase snacks and drinks from the Snack Stand at Glacier Point. If you’re going to depend on this for re-fills and refueling on your hike, you need to make note of their hours. Well water from a spigot is also available at Glacier Point, though it’s not the best tasting water in the world.

The hike begins from Glacier Point where some of the most iconic views of the Yosemite Valley are seen. Normally from this vantage point at 7200 feet you’ll have outstanding views of Half Dome, North Dome, Basket Dome, the Royal Arches, Tenaya Canyon and Yosemite Falls. However, on this day, we were rudely greeted by haze that greatly diminished the normally spectacular vistas. 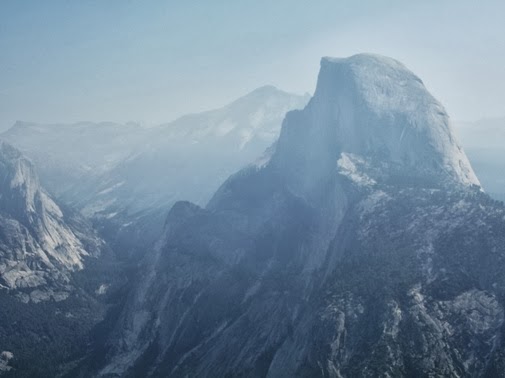 2013 in Yosemite National Park will be remembered for a very long time. The Rim Fire, which would become the third largest wildfire in California history, burned more than 257,000 acres along the western edge of the park, and created haze that shrouded the surrounding area for several weeks.

After leaving the sights and crowds at Glacier Point, we ventured onto the Panorama Trail. The upper portions of the trail are wide open, and provide some outstanding panoramic views of the Yosemite Valley, Tenaya Canyon and Half Dome. It’s pretty apparent how the trail builders got their inspiration when it came time to naming this trail. 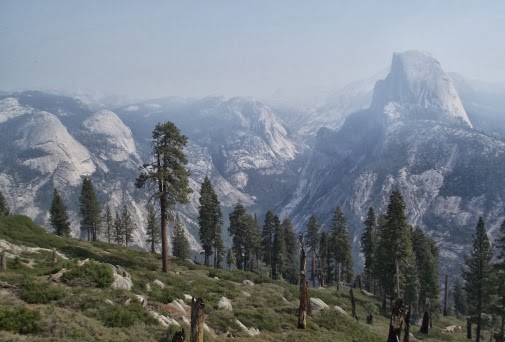 From Glacier Point the trail makes a short climb before it starts on its long descent towards Illilouette Fall. This portion of the route is fully exposed to the sun, making this a very hot and dusty hike during the summer months.

Until you reach the Merced River, several miles down trail, Half Dome will be the dominating feature on the landscape. The granite monolith rises almost 5000 feet above the Yosemite Valley floor, while topping out at 8836 feet in elevation. 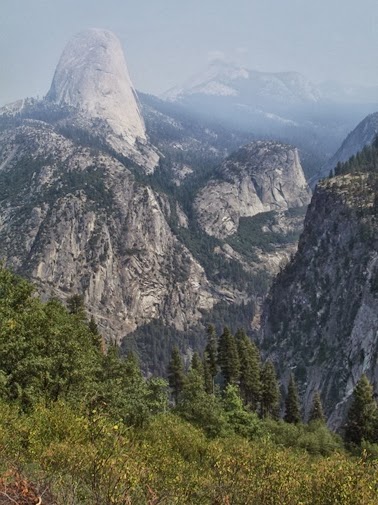 Roughly 1.6 miles from Glacier Point you’ll reach an unmarked side trail that leads to an overlook of 370-foot Illilouette Fall. You’ll be able to hear the waterfall before you actually see the side trail. 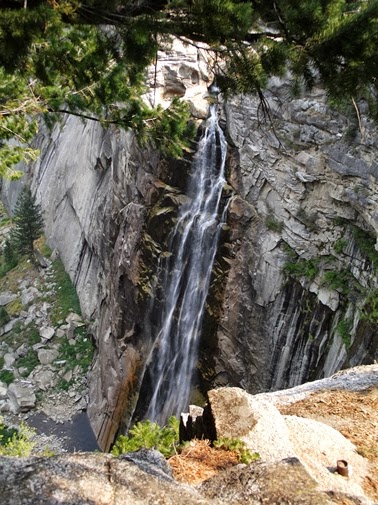 Soon afterwards the trail temporarily bottoms out at Illilouette Creek, and then begins a moderately steep climb up to Panorama Point. Over the next three-quarters of a mile you’ll gain roughly 450 feet. Near the point where the trail levels out a bit, look for an unmarked side trail that branches off to the left. This spur leads to an overlook called Panorama Point - about 100 feet off the main trail - which provides a pretty awesome view of Half Dome, the Royal Arches and the Illilouette Gorge. Although it passes through some chest high brush, the short trail is easy to follow.

From Panorama Point the trail skirts above Panorama Cliff for the next mile-and-a-half, until reaching a three-way junction. After staying to the left to continue on the Panorama Trail, the route makes a fairly sharp descent down towards the John Muir Trail junction. Here you’ll have the option of continuing on towards Nevada Fall where the trail crosses over the top of the waterfall, before making a very steep descent down its north side. We opted to turn left onto the John Muir Trail, which offers an absolutely stunning view of Nevada Fall with Half Dome and 7076-foot Liberty Cap towering above the 594-foot waterfall. 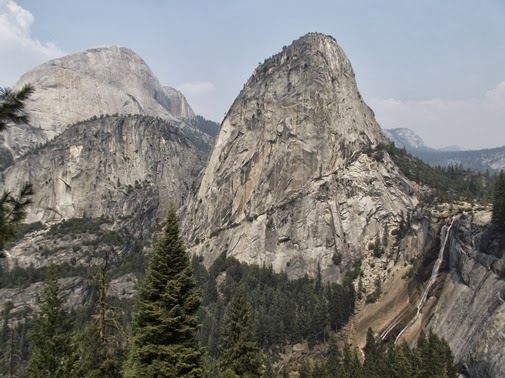 The John Muir Trail is a world famous long-distance trail that traverses across the High Sierra. The northern terminus is at Happy Isles in the Yosemite Valley, while the southern terminus is located at the top of Mount Whitney, the highest point in the continental United States. In between the trail travels 215 miles while passing through Yosemite, the Ansel Adams Wilderness, Sequoia National Park and Kings Canyon National Park.

The connector trail descends roughly four-tenths of a mile down a very steep and rocky path. Take your time here, as the views above Vernal Fall are outstanding. 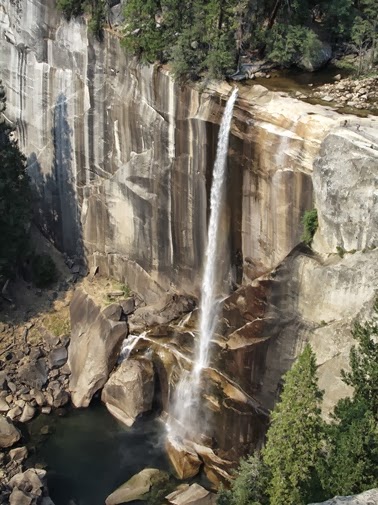 Once you reach the bottom of the connector trail you’ll take a left onto the famous Mist Trail. Soon you’ll arrive at the Merced River and the Emerald Pool, and shortly thereafter, the top of Vernal Fall.

From the top of Vernal Fall the trail makes an extremely steep descent down a couple hundred stone steps carved into the granite cliff wall. To reiterate some warnings from the park, you should descend the uneven and slippery steps with great care, and by no means get near the water, as many people have lost their lives over the years by slipping into the rapid currents of the Merced. Since 1924 at least 18 people have lost their lives after being swept over Vernal Fall. 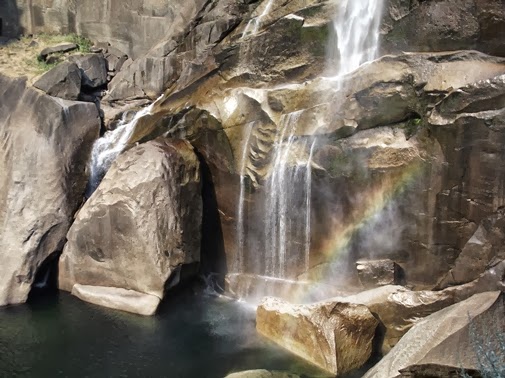 The Mist Trail was already in use by the time the state of California took over management of the Yosemite Valley in 1864. Ladders were originally put in place so that hikers could climb to the top of Vernal Fall. However, after a man fell to his death, the ladders were replaced with wooden steps. Finally in 1897 the wooden steps were replaced with the stone steps that are used today. Hikers should note that there are no railings along much of this portion of the trail. Moreover, the steps become quite slippery during the spring and early summer months when mist from the waterfall sprays the entire canyon. Hikers are known to become completely drenched while passing through this section of the trail. 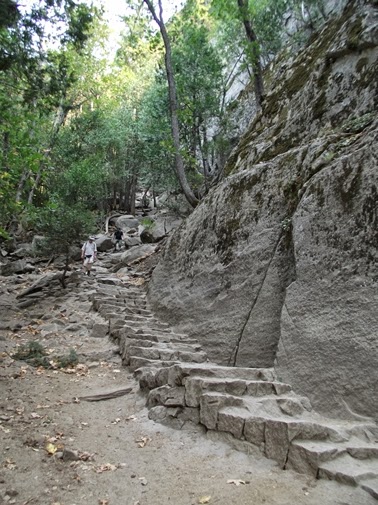 As you proceed down the stone stairway you’ll be treated to some outstanding upfront views of the 317-foot Vernal Fall. 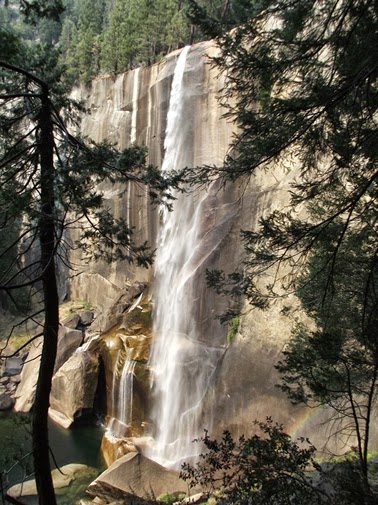 Once below the carved steps section the trail crosses the Vernal Falls Bridge. Be sure to look up river here for one last view of the waterfall. From the bridge the trail descends straight downhill for eight-tenths of a mile on a paved path, before ending at the Happy Isles trailhead.