That was Martha Longmire’s reaction upon seeing the lush meadows and spectacular wildflowers of Mount Rainier’s southern valley for the very first time in 1885. The name would stick. Today the most popular area in Mount Rainier National Park is known as “Paradise”, and once you set your own eyes upon it you’ll understand why.

Based on the photos and the information I gathered beforehand, I had the feeling that the Skyline Trail in the Paradise Valley was going to be great hike. However, I probably underestimated just how amazing it really would be. The Paradise area is absolutely stunning. In fact, I would probably have to rank the Skyline Trail among my top 5 hikes of all time.

First time visitors may find the network of trails at Paradise a little confusing. You’ll have several options, but the most popular route is the Skyline Trail loop. You can hike the loop “as is”, or you can tack on side trails to explore additional territory, or use connectors to cut-off portions of the hike and decrease your overall mileage. Fortunately the trail junctions are all well marked.

For our hike we basically stayed on the main loop and hiked in a clockwise direction. Our only deviation was the side trip to visit Alta Vista, which is a little more than a half-mile from the trailhead.

The hike begins near the Paradise visitor center. Here you’ll find one the most interesting and unique trailheads you’ll ever come across. Etched into the stone steps is a quote from John Muir about his reaction to seeing this incredibly beautiful valley in 1889:

"... the most luxuriant and the most extravagantly beautiful of all the alpine gardens I ever beheld in all my mountain-top wanderings." 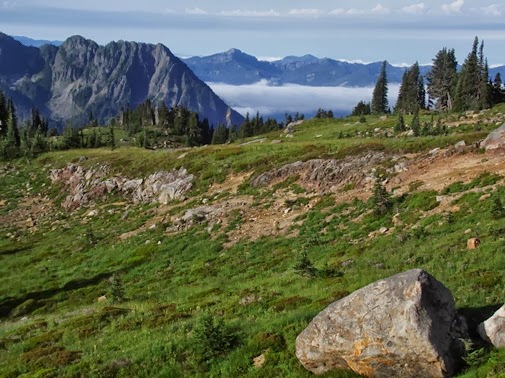 Much of the lower portions of the trail are paved, but include some relatively steep sections.

Although it was a little late in the season there were quite a few wildflowers that were still in bloom during our early-September hike. As the wildflower season progresses you’ll have the opportunity to see avalanche lilies, pink heather, Western pasque, Rosy spirea, purple lupine, cinquefoil, magenta paintbrush, bistort, Jacobs ladder, lousewort, valerian and many others at various times throughout the spring and summer.

Despite the top of Mount Rainier being shrouded in fog that morning, we still had outstanding views of the rugged Tatoosh Range towards the south, as well as views of the Nisqually Glacier towards the north and west. Nisqually is the 7th largest glacier on the mountain, and covers an area of roughly 1.8 square miles.

The glaciers on Mount Rainier are a result of the heavy amounts of snow that fall each winter. In a typical year, roughly 53.6 feet (643 inches) of snow will fall in the Paradise area. For many years Paradise held the world record for most snowfall in one year. During the winter of 1971-1972, 93.5 feet (1122 inches) of snow fell in the valley! 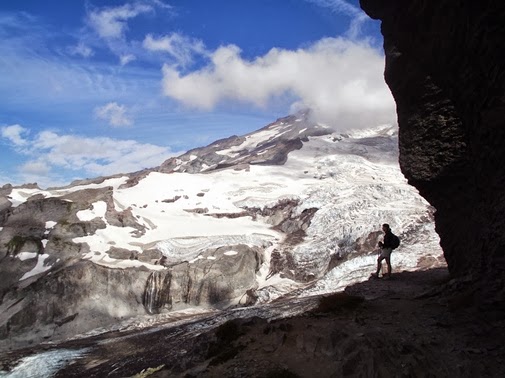 When traveling or hiking in Mount Rainier National Park it’s always a good idea to bring rain gear along. Because of its immense size, the mountain is able to create its own weather.

With so much of the mountain covered in ice and snow, it’s hard to believe that Mt. Rainier is part of the “Ring of Fire,” a string of volcanoes that almost circles around the entire Pacific Ocean. Indeed, Rainier is still an active volcano. It occasionally spews ash and steam, and there are periodic earth tremors. The last small eruption took place in the late 1800s, while the last large eruption occurred about 1000 years ago. 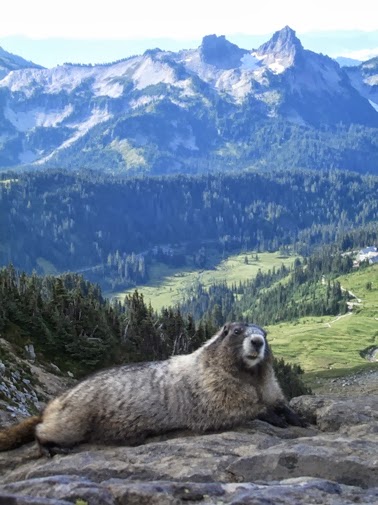 The premier destination on the Skyline Trail loop is Panorama Point. Although the views are outstanding along the entire route, they are at their absolute best from Panorama Point. On a clear day this vantage point provides amazing views of the Tatoosh Range, as well as Mount Adams, Mount St. Helens and Mount Hood in the far-off distance. From this perch Mount Rainier and the Nisqually Glacier are practically right on top of you. Although the uppermost portions of the mountain were socked in for the majority of our hike, we were still surrounded by incredibly beautiful scenery.

Just beyond Panorama Point hikers will have the option of taking the lower Skyline Trail, or continuing up the main trail. The lower Skyline Trail cuts off about a half-mile from the hike, however, it crosses over a fairly large snowfield. The first fifty yards of the cut-off is relatively safe, however, the trail makes a fairly steep descent down the snowfield before returning to terra firma. It became quite obvious that this section of the trail was entirely out of our league. None of us felt comfortable trying to negotiate the slick ice at such a steep angle. So, we backtracked and took the main route that travels above the snow. Over the next three-tenths of a mile the trail climbs more than two hundred feet to the highest point on the loop. It was all worth it though, as this vantage point provides the best views of the Nisqually Glacier on the entire route. 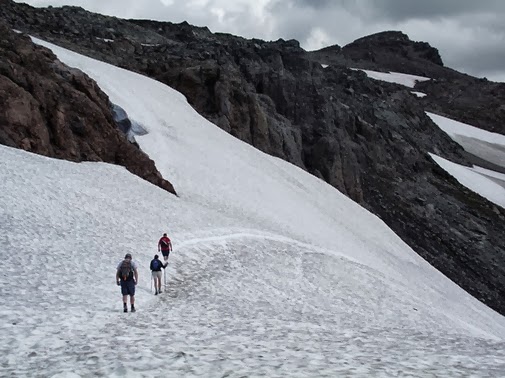 As we progressed down the mountain we passed two large groups of climbers as they made their way up to Camp Muir. Their ultimate destination, at least they hoped, was to the summit of Mount Rainier. Further down the trail we could see climbers assembled on the lower portions of the Nisqually Glacier – presumably getting ready to practice self-arrests on the snow and ice. 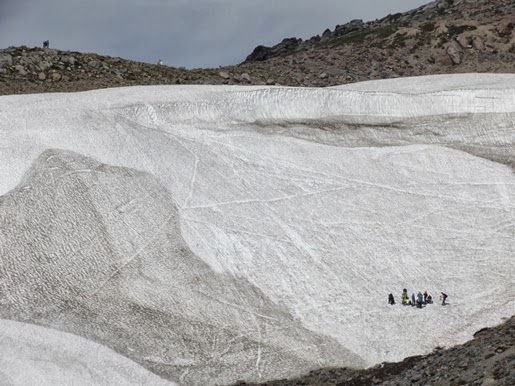 When we arrived at Paradise that morning the top 4000 or 5000 feet of Mount Rainier was socked-in by clouds. As the day progressed, however, we were incredibly lucky to have the sky completely open up for us. Almost two-thirds of the way through the loop we noticed that the clouds had dispersed from the peak, and for at least a half-hour or so we had completely unobstructed views of the mountain. The peak is absolutely massive - much bigger than I imagined, and far larger than any other mountain I've ever seen. 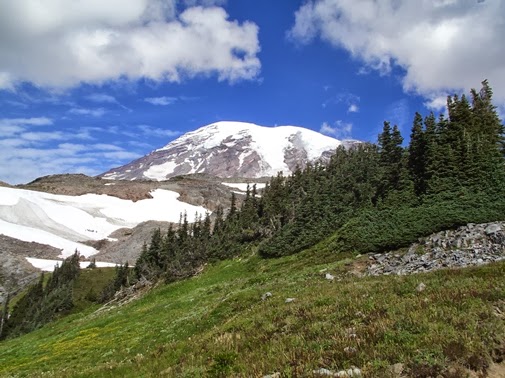 As we continued further down the mountain we happened to pass an older woman climbing up the trail. As we stopped and chatted for a few minutes, my curiosity finally got the best of me. I just had to ask how old she was, and she told me she was 88 years old! She also said that she summited Mt. Rainier 11 years ago - at the tender age of 77! She said she did the climb in 19 hours straight, and bypassed the normal overnight bivouac at Camp Muir. We asked what her name was, and she also told us that the local press had covered her climb, as she became the oldest woman to ever summit Mt. Rainier. 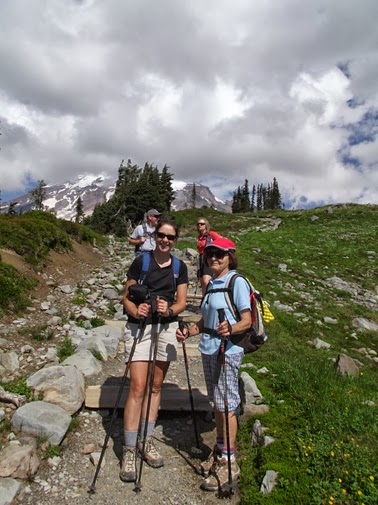 So, when we returned home a couple of weeks later, we did a little research on Bronka Sundstrom. We found out that she's a bit of a local legend. She and her late husband have hiked, snowshoed and skied in the park on hundreds of occasions. We also found out that Mrs. Sundstrom was a Holocaust survivor, having been a prisoner of the Auschwitz and Bergen-Belsen concentration camps during WWII. Looking back now, we really wished we could have spent more time talking with her. If there's a takeaway from our chance meeting, it's to live life to the fullest: do the things you like more often, and if possible, do the things you dislike less. 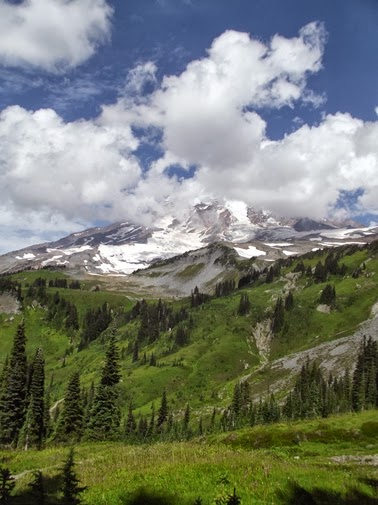 Towards the end of the loop you’ll pass by Myrtle Falls: 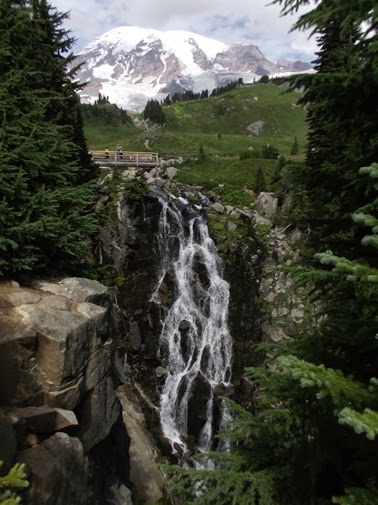 The Skyline Trail loop should be on every hiker’s bucket list. The hike was so incredibly beautiful that it was the first time that I ever kept my camera in my hand for the entire trip. The amazing scenery just never ended!