The Oregon Coast has been near the top of my bucket list of places to see for as long as I can remember. Based on the hundreds of photos I’ve seen over the years, I knew there were numerous spectacular places to visit. Whenever I looked at a map of Oregon I was always amazed by the number of state parks that line the coast from top to bottom. From my standpoint, the biggest problem was trying to figure where to go, especially if you only have a limited amount of time. I was most interested in exploring rugged beach areas with off-shore rocks, as well as headlands that offer expansive panoramic views.

Because we were visiting so many other places in the Pacific Northwest on this trip, Kathy and I allotted only two days to tour almost the entire Oregon Coast, from north to south.

After exploring the Columbia River Gorge earlier that day, we arrived on the coast a couple of hours before sunset. Since we were staying in Seaside that night, we decided to drive a couple miles south to first check out the famous off-shore rocks at Cannon Beach before checking into our hotel. When we arrived at the beach it was the first time I’d ever laid eyes on the Pacific Ocean. Perhaps my reaction was similar to that of the Lewis and Clark Expedition. When they arrived on the coast in November of 1805, just a little further north from our location, William Clark noted in his journal: "Ocian in view O! The Joy!" 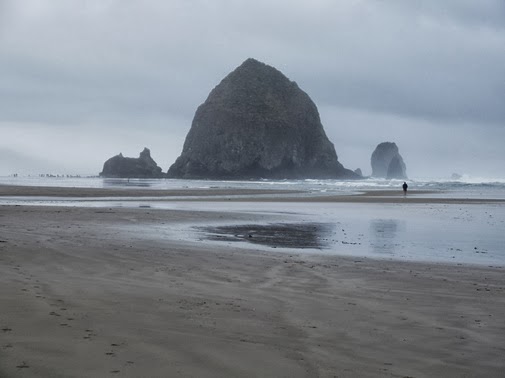 The next morning we drove up to Ecola State Park to take-in the grand views above Cannon Beach. The park also offers distant views of the Tillamook Rock Lighthouse, a 62-foot high tower that stands 133 feet above the sea on a small rock islet, roughly 1.2 miles offshore. Although no longer used as a navigational aid, it now serves as a columbarium, where the cremated remains of loved ones are held. 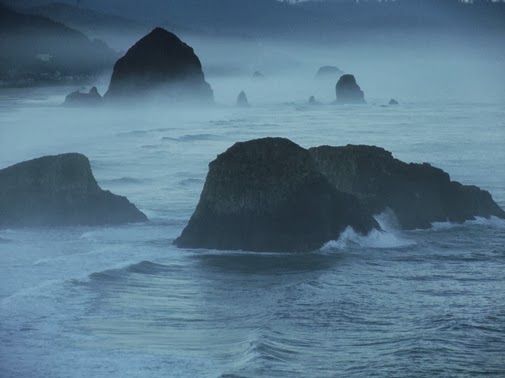 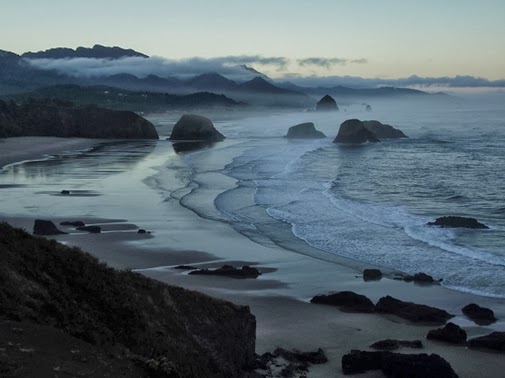 As we proceeded south towards our next destination we made an unplanned stopped at the Tillamook Cheese Factory. Here we had the opportunity to sample some of the excellent cheeses made on the premises. We also took the self-guided tour of the cheese making and packaging processes.

Further down the coast we stopped at Cape Lookout State Park to hike a portion of the Cape Trail. Cape Lookout is one of the largest capes on the north coast. The trail travels through a thick forest of Sitka Spruce and Western Hemlock, roughly 800 feet above the shoreline. As you proceed down the trail you’ll be able to hear the surf crashing into the sand and rocks below. After about a half-mile of walking the trail reaches the edge of the cliff where you’ll have some outstanding views looking towards the south. 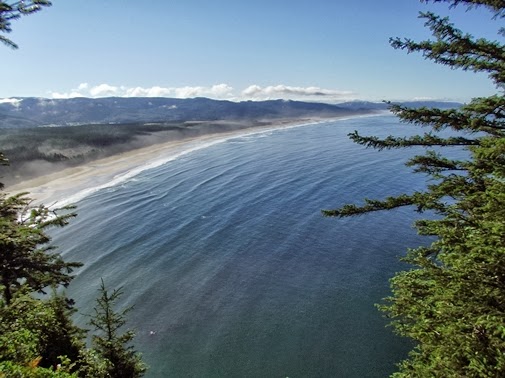 A little further beyond this point is a plaque honoring the crew of an Army Air Force B-17 bomber that crashed into the cape while patrolling the coast during World War II. On August 1st, 1943, the plane was reportedly flying at 200 miles-per-hour in a dense fog when it flew directly into the headland. Nine of the crew members died, but the bombardier miraculously survived. An account of this pretty amazing story can be found here.

The trail continues all the way out to the tip of the cape. You can continue on for another six-tenths of a mile to a vantage point that looks towards the north, or for another 2 miles to the end of the cape.

The principal route down the Oregon coast is Highway 101. Along the northern portions it’s a winding, twisty road that goes through a lot of towns from a bygone era, some of which have already seen their better days. You really need to watch the posted speed limit along the road as well. It’s constantly fluctuating between speeds of 20 and 55 MPH. And yes, we saw quite a few cops on patrol throughout the day. 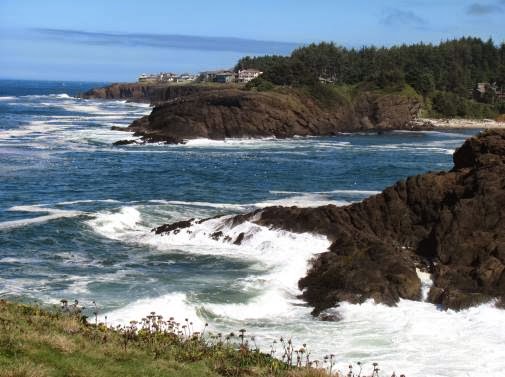 South of Depoe Bay we took the Otter Crest Scenic Loop which took us out to Cape Foulweather, one of the more scenic areas along the rugged Oregon coast. Be sure to stop at the Devil's Punchbowl, which is believed to be a collapsed sea cave where the water churns like a frothing cauldron during high tides. 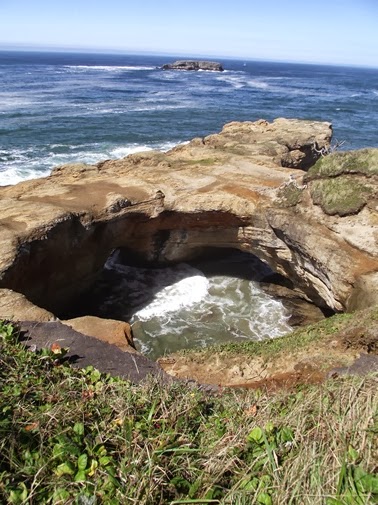 Cape Foulweather received its name from the English explorer, Captain James Cook, when he discovered the promontory during a storm on March 7, 1778. It would become the first named geographical location on his voyage to the Pacific north coast. 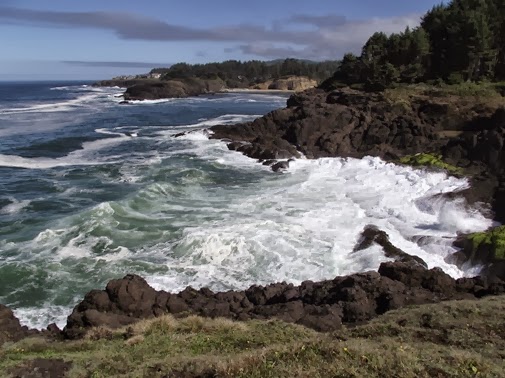 During our visit we could see at least 4 whales bobbing in and out of the water with the naked eye. However, we also had binoculars that provided some fairly up-close views of the mammals as they lunged out of the water from time to time.

A little further south, at Yaquina Head Lighthouse, we saw two more whales, in addition to the two harbor seals we saw swimming just off shore. Yaquina Head is considered to be one of the best places along the coast to spot migrating whales. 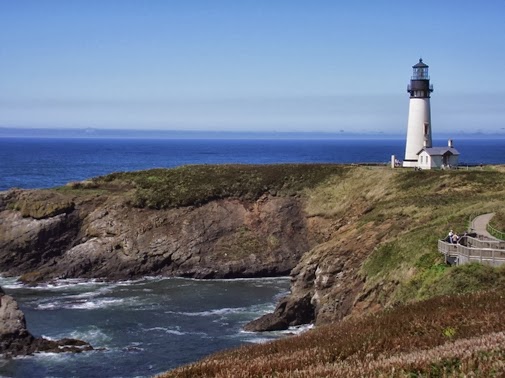 The Yaquina Head Lighthouse is a very impressive and photogenic structure that sits at the end of a narrow headland that extends one mile into the Pacific Ocean. At 93-feet high, the tower is the tallest lighthouse on the Oregon coast. It was first illuminated in 1873, and still serves as an aid to navigation on the coast, as well as the entrance to Yaquina Bay. 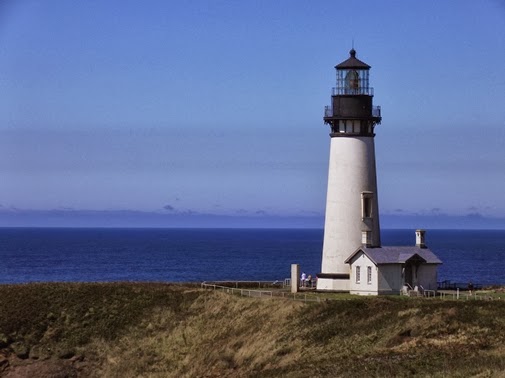 Our final destination before stopping for dinner was the at Heceta Head Lighthouse, just north of Florence. The iconic lighthouse sits 200 feet above the sea at Heceta Head, and has a 56-foot tower. First illuminated in 1894, the lighthouse can be still be seen 21 miles from land, and is rated as the strongest light on the Oregon coast. 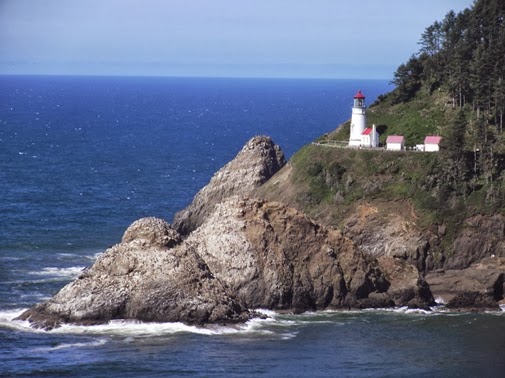 After a fairly long day on the road it was time for a little food. We originally planned to visit a brewpub in Florence, but apparently they went out of business. So, we decided on plan B, which was to check-out the Waterfront Depot, an establishment that has received quite a few great reviews. We arrived about 20 minutes before they opened their doors, so we decided to wait. Not knowing exactly how popular this place was, we discovered that we might not get a seat, as most seats were already spoken for by prior reservation. Fortunately there were a couple of open spots at the bar, which we were able to grab. Good thing, because we had an absolutely outstanding meal, and a very friendly bar tender who allowed us to sample a blueberry-vodka concoction he was working on. Overnight he had soaked fresh blueberries in a container of vodka. When we arrived that afternoon, he was in the process of straining the berries out, leaving behind only the blueberry-flavored vodka. It was a pretty interesting flavor. For dinner, I had the herb encrusted chicken, while Kathy had the Cajun salmon. Both meals were quite fantastic. 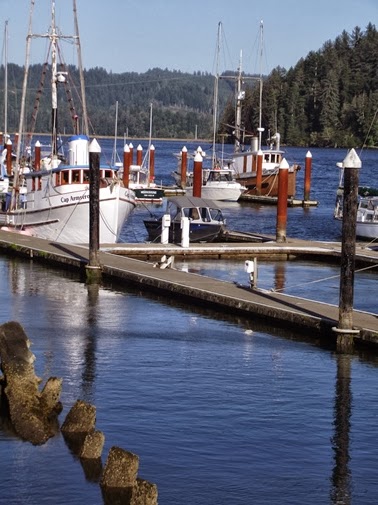 After spending that night in Coos Bay, the second day of our Oregon Coast journey would take us down along the southern coast.

100 Hikes/Travel Guide: Oregon Coast & Coast Range - 363 miles of cliff-edged capes, public beaches, wild rivers, sand dunes, rainforest, and coastal mountains. Many of the top attractions are within easy reach of Highway 101, but others are accessible only by trail. To help you explore both the civilized and the wild parts of Oregon's spectacular shore, this book blends two kinds of guides -- a detailed Travel Guide for touring by car and a complete Trail Guide for planning adventures on foot.