There are a couple of access points for hikers to begin hiking the Naches Peak Loop Trail, but the easiest and most popular location is from the Tipsoo Lake picnic area. This trailhead is located off State Route 410 near Chinook Pass on the eastern side of Mt. Rainier National Park, roughly 3 miles east of the State Route 123 junction at Cayuse Pass.

This relatively easy loop hike circles around 6452-foot Naches Peak, a mountain that lies on the border between Mt. Rainier National Park, the William O. Douglas Wilderness Area, and the Wenatchee National Forest. You can hike the loop in either direction, but conventional wisdom says that you're better off hiking in a clockwise direction, which provides the best views of Mt. Rainier during the back half of the loop.

The night before our hike some pretty heavy rain had passed through the area, and the forecast was calling for more showers the next day. So, when we woke before sunrise the next morning, we really weren't sure if we were going to be able to hike that day. As we drove to the trailhead we passed through some pretty heavy fog as well as some light rain. However, when we arrived at Tipsoo Lake we had clear blue skies directly above us and towards the east. To the west we had an incredible view of the cloud bank hanging below Cayuse Pass and the mountain peaks to the west.

The hike begins with a moderate climb up towards Chinook Pass, while Tipsoo Lake and Naches Peak will be on your right.

At Chinook Pass the trail crosses over the entrance way to the park. Once across the footbridge the loop begins following the Pacific Crest Trail, a 2650-mile national scenic trail that traverses the Sierra and Cascade Mountains, while traveling from Mexico to Canada. The prominent mountain directly to the west from you at this point is 6226-foot Yakima Peak. A short distance later the trail enters the William O. Douglas Wilderness area of the Wenatchee National Forest. The Pacific Crest Trail runs for 27 miles along the crest of this 169,000-acre wilderness area. 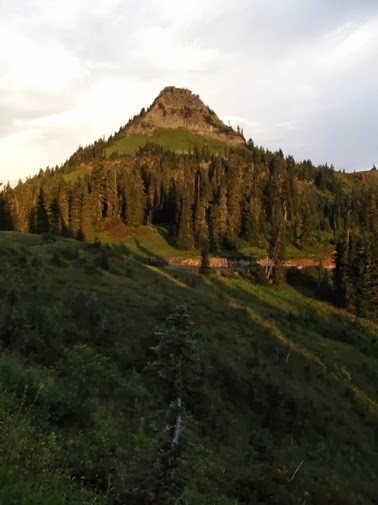 Although the trail passes through a couple of small pine groves, for the most part it travels through open country and lush meadows. Normally these meadows are bursting with wildflowers, such as purple lupine, Indian paintbrush, columbines, western anemone and beargrass, but on this early September hike they were already past their prime. This trail is also known for its abundance of huckleberries during the late summer and early fall time period. 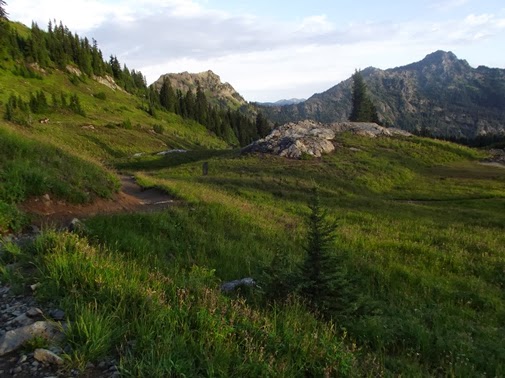 While on the eastern half of the loop the trail begins to make a moderate climb up the southeastern ridge of Naches Peak. At roughly 1.6 miles you'll reach the top of the climb, which provides excellent views of Dewey Lake in the valley below. On a clear day you can also see Mt. Adams and Goat Rocks towards the south. 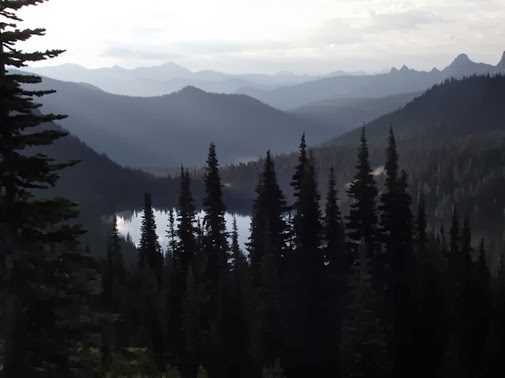 Shortly thereafter the trail re-enters the national park, and in a short distance beyond the boundary you'll reach the Naches Peak Loop Trail junction. Here hikers will have the option of making the short side trip down to Dewey Lake. This 2.6-mile roundtrip hike along the Pacific Crest Trail will also include an 800-foot climb back to the junction. To continue on towards Tipsoo Lake hikers should stay right here.

From the trail junction stunning views of Mt. Rainier begin to open up. Unfortunately, on this day, we couldn't see the top of the 14,410-foot mountain due to lingering clouds and fog. As the trail continues downhill you'll pass through more incredibly beautiful meadows that offer outstanding views of the surrounding mountains. 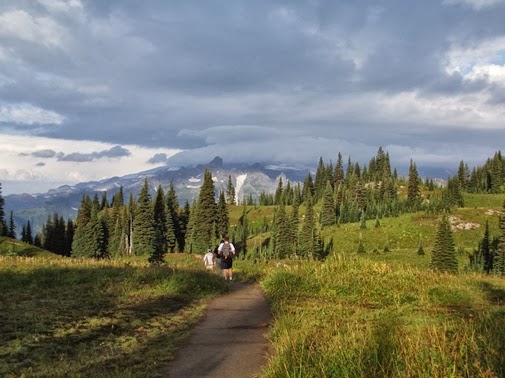 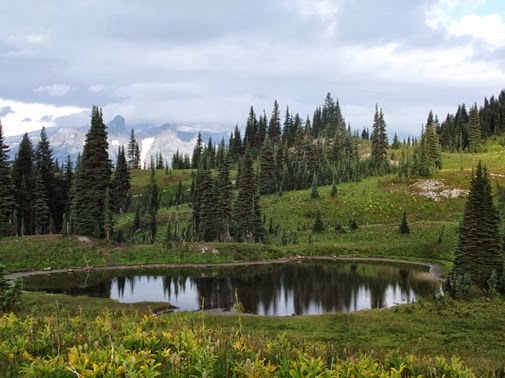 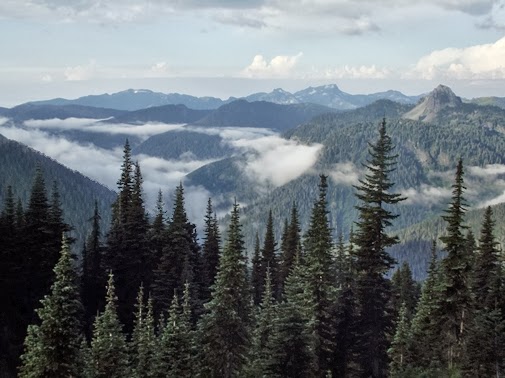 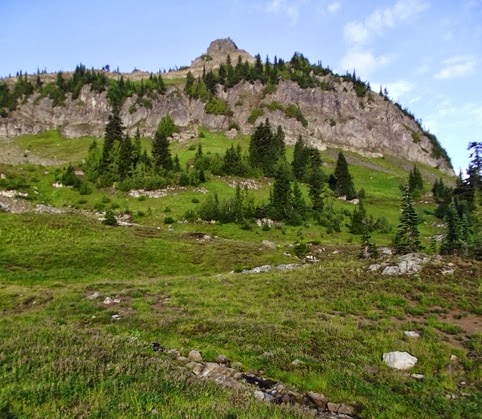 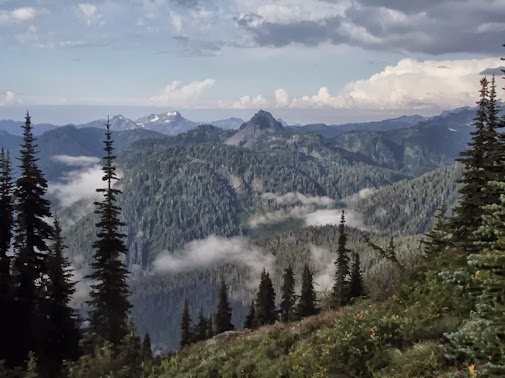 Although considered to be one of the more popular trails in the park, we saw only one other person on this early morning hike.