The Grand Canyon: Rim to Rim

For many hikers, a “bucket list” or “life list” just wouldn’t be complete unless it included a rim to rim hike across the Grand Canyon. I was fortunate enough to do just that over the Memorial Day weekend in 1996 with three fellow hikers. While the hike itself was no easy task, perhaps just as difficult was trying to coordinate all the required reservations - at least one year in advance! 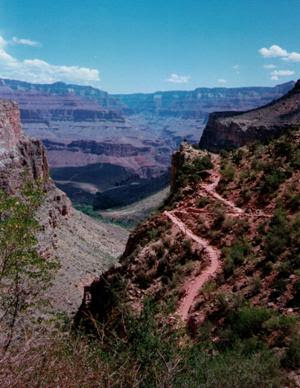 After spending the night at The Grand Canyon Lodge, the only lodging on the North Rim, we took the park shuttle to the North Kaibab Trailhead at daybreak to begin our 13.6-mile trek to the bottom of the canyon. Starting off we dressed in lots of layers as the temperature was quite cold that morning.

Surprisingly, the hike begins in a spectacular alpine setting. As you continue down the trail you’ll quickly begin to see millions of years of erosion as you descend through the various geologic eras. You’re also likely to see guided mule tours as you proceed down the canyon. Some might consider this the “easy” way down to Phantom Ranch, but some of those folks didn’t appear to be having a particularly good time. We learned that mules prefer to hug the outside of the trail, which was a little frightening for some of the riders. I should note here that the park service emphatically claims that no one has ever been killed while riding a mule in the park. 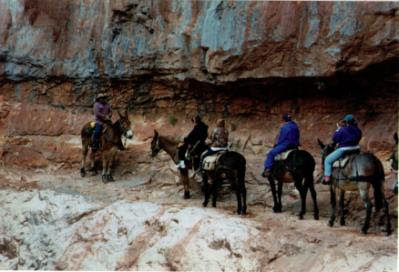 This being my first visit to the deserts of the southwest, I was quite surprised by the amount of wildflowers we saw along the trail.

The first section of the North Kaibab Trail to Supai Tunnel is extremely steep, dropping more than 1400 feet in the first 1.7 miles. There are several sections where the trail is essentially a shelf on a wall. For someone who has a bit of fear of heights, I thought the steep drop-offs in some places were quite frightening. From Supai Tunnel to the Cottonwood Campground, the trail isn’t quite as steep, but still has an average grade of 10%. Once past the campground, with “only” 7 miles to go, the hike becomes much easier on the knees and follows along the bottom of the canyon until you reach Phantom Ranch. 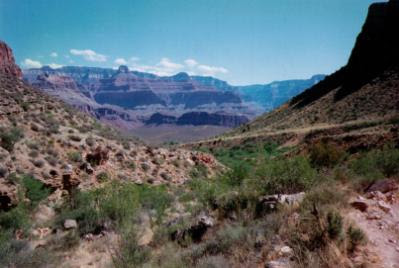 Built in 1922, the Phantom Ranch is only accessible by foot, mule or raft, and seems like an oasis after an all-day hike. We arrived late in the afternoon and made our first stop at the Phantom Ranch Canteen where t-shirts, snacks and cold drinks are available. After purchasing the ceremonial Phantom Ranch t-shirt and a supersize Snickers, we headed over to our cabin. After a long day on the trail my feet were pretty beat up. Since our cabin sat along Bright Angel Creek, I immediately removed my boots and dipped my achy feet into the creek. Although quite cold, it felt great. While the cabins only have the basics: bunk beds, a sink and toilet, guests must go to a separate building to take a shower. What I remember most were the luxurious towels and the hot water…this was an unexpected treat for being at the bottom of the Grand Canyon! 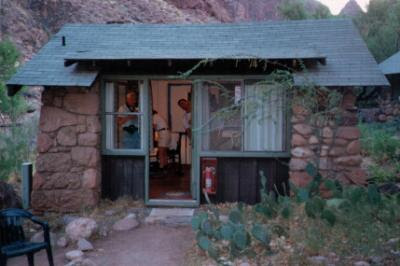 Dinner is served at a pre-determined time and your menu is chosen at the time you make your reservations. I’m glad I went with the beef stew – probably the best I’ve ever had. After the ranger presentation we all turned in early - too tired to do anything else.

After an incredible pancake breakfast the next morning we hit the trail at daybreak, each with a sack lunch provided by the Ranch.

Shortly after leaving the Ranch we crossed the Colorado River via the Bright Angel Suspension Bridge, where hikers can look straight down through the grated bottom and see the raging river – another challenge for someone with a fear of heights! The hike up Bright Angel Trail is a 9.9 mile trek. While the first three miles from the Ranch are relatively easy, the last 7 miles are a long slow slog to the top. Since Bright Angel Trail is one of the most popular trails in the park, it’s also the most congested, especially as you get closer to the top. It’s no wonder why though, the views are large and spectacular. 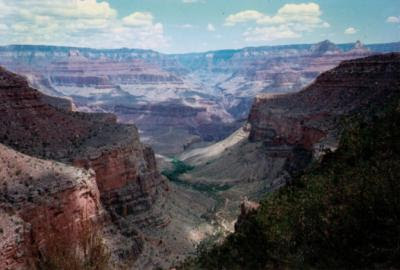 About midway up a park ranger stopped all hikers from going any further for roughly 30 minutes due to a helicopter rescue. The next day we actually met the rescued woman in the airport and found out that she broke her ankle after tripping over some rocks. This is another reminder of how dangerous hiking can be, especially on the Bright Angel Trail, which was named as one of the 10 most dangerous trails in the country by Backpacker Magazine a few years ago. 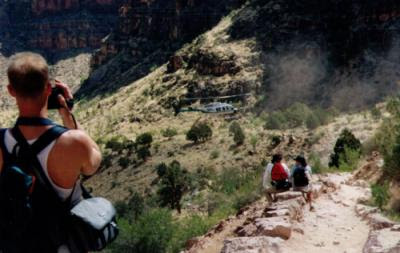 Although tired and sore, once we reached the top of the South Rim I was overjoyed by a spectacular sense of achievement. At that time it was the most miles I’d ever hiked in a two-day period. After a well-deserved ice cream stop we headed over to our hotel, El Tovar, which is another one of the park’s National Historic Landmarks. This was the perfect spot to pamper ourselves after two days and almost 24 miles of hiking.

After all is said and done, some may ask “was it worth it?” Absolutely! As one of the Seven Wonders of the World, the Grand Canyon is a national treasure everyone should enjoy at least once in their lives.


Special Notes: The park sternly warns that hikers should not attempt to hike from the rim to the river and back in one day, especially during the months of May to September. Over 250 people are rescued from the canyon each year.

Because the inner canyon air is so dry and hot, sweat evaporates instantly, making its loss almost imperceptible. The park website notes that your body can only absorb about 1 quart of fluid per hour, so drink 1/2 to 1 quart of fluids every hour that you're hiking in the heat. You should also alternate between drinking water and a sports drink with electrolytes. The park also warns that success in the summer can be as simple as staying off the trail and out of the sun between 10 a.m. and 4 p.m.

Hikers should also note that potable water is usually available in a couple of locations along both trails, but the park warns that you shouldn't rely on it. Check with a ranger, or trailhead signage, prior to your hike to make sure it's available.

Hiking Grand Canyon National Park provides first hand descriptions and detailed maps for all of the developed trails in the park - from easy day hikes suitable for novices and children, to extended backpack trips geared for intrepid wilderness travelers. The guide covers 15 hikes on the South Rim and 13 hikes on the North Rim. Also included are tips on safety, hiking with children, access, and services, as well as indispensable information about backcountry regulations, permits, and water sources.