Lookout Mountain in the North Cascades

After disembarking from our Alaskan cruise ship in Vancouver, British Columbia, we drove down to Burlington, Washington with the intention of hiking in North Cascades National Park over the next couple of days. Since this was mid-June we knew that our options would be quite limited as the best hikes are at the higher elevations, and therefore would be impassable due to snow. Because it rained on our first day we were left with only one day to do any hiking in the park. Our one and only hike, however, was almost a complete bust. After consulting with a park ranger that morning we decided that the hike to Monogram Lake would be our best option. As you read further below you’ll discover that we decided to abandon that route, and instead, opted to head towards Lookout Mountain.

The Monogram Lake Trail begins in the Cascade River Valley, and immediately climbs steeply through a lush temperate rain forest of towering western hemlocks. Just a few yards up the trail we saw this albino banana slug: 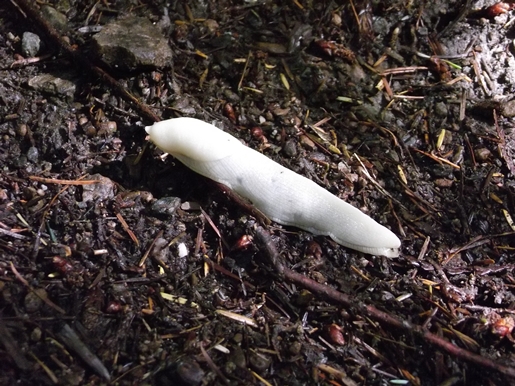 At roughly one mile from the trailhead, just above a steep rock cliff section, we reached an unmarked side trail that lead towards the left. This went nowhere, so we continued along the main trail which proceeded towards the right. This first stretch of trail is very steep and strenuous. Although you’re climbing up and away from the river, you’ll still be able to hear the Cascade River rumbling through the gorge below throughout this portion of the hike.

As we climbed higher we could also hear the periodic calls of varied thrushes’ emanating from the surrounding woods. Their distinctive call sounds like a referee’s whistle. 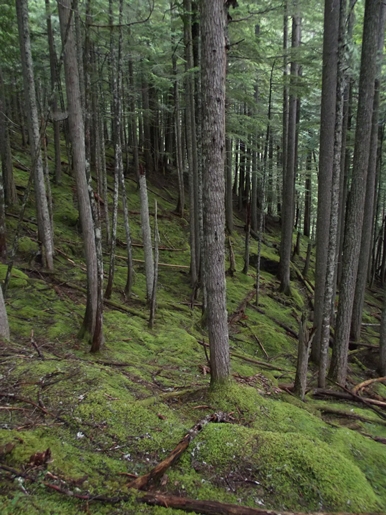 At 2.1 miles we reached an overgrown meadow inundated with stinging nettles. This section of trail was quite treacherous. In addition to the stinging nettles, the chest high vegetation did its best to block our view of the path as we climbed over logs, large rocks and rain run-off. This section of “trail” travels for roughly two-tenths of a mile before reaching the upper side of the meadow. You should definitely consider bringing trekking poles, and you should probably consider wearing long pants and a long shirt to protect against the stinging nettles. As you proceed higher during this stretch you might notice 8868-foot Eldorado Peak looming almost directly behind you. 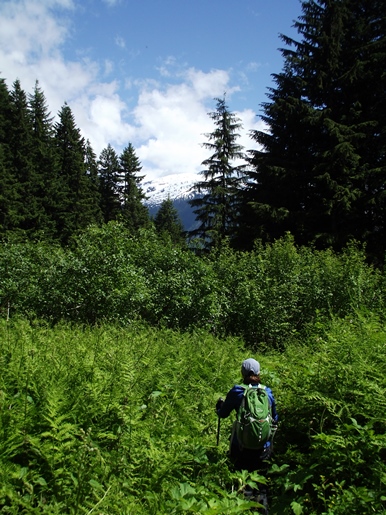 At roughly 2.7 miles we reached a creek crossing with a small waterfall tumbling just upstream. Unfortunately we didn’t have a footbridge to help us get to the other side. It appeared there was once an existing bridge here, but had been washed away at some point. Using rocks and a few planks of wood we found nearby, we built a makeshift bridge and got across with no problems.

Roughly one-third of a mile above that stream crossing we reached a split in the trail. To the left is the path that travels to Lookout Mountain. We turned right to continue along the Monogram Lake Trail - towards our original destination. After about a third-of-a-mile the trail finally entered North Cascades National Park. Up to this point we had been traveling through the Mt. Baker-Snoqualmie National Forest. 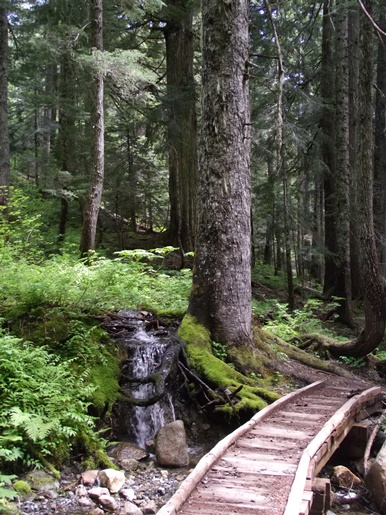 Shortly after passing the national park boundary, and after crossing over numerous downed-trees blocking our path, we reached a field that had essentially become a swamp after all the recent rain. It looked like this area was nearly impassable, even if we attempted to bushwhack around it. To be honest, we were exhausted and were tired of all the obstacles, and decided that we had had enough. So we turned around with the thought that we would try to make it up to Lookout Mountain. 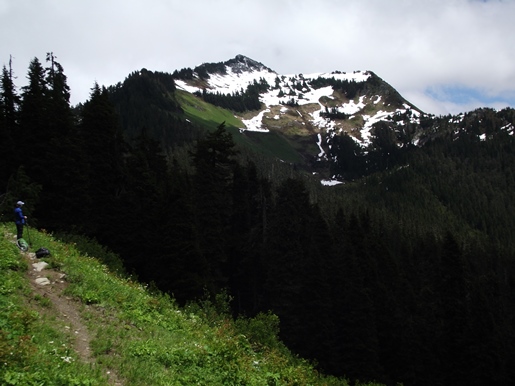 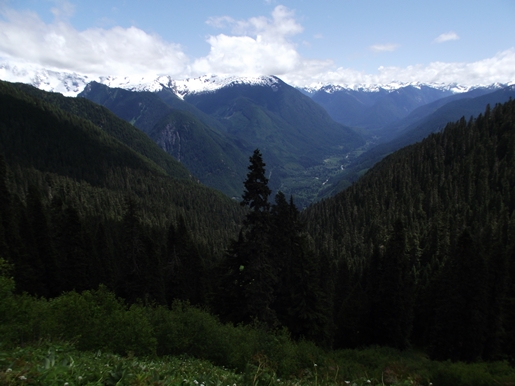 Once back at the trail junction we turned towards Lookout Mountain. Roughly three-quarters of a mile above the split we reached a large meadow along the northeast ridgeline, just below the summit of Lookout Mountain. This area offered great views of the Cascade River Valley, Hidden Lake Peak, and portions of Eldorado Glacier and Inspiration Glacier. We could also see the fire lookout atop Lookout Mountain roughly one thousand feet above us (see the last photo below). We decided that this would be the end of the trail for us, and broke out the sandwiches. 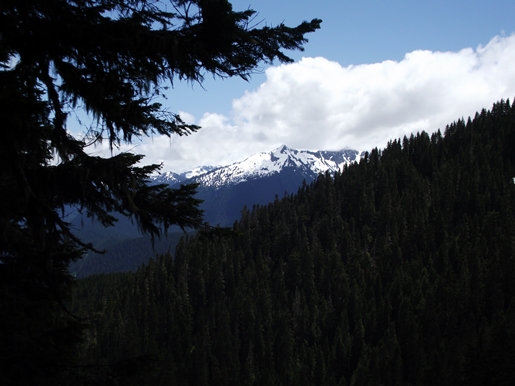 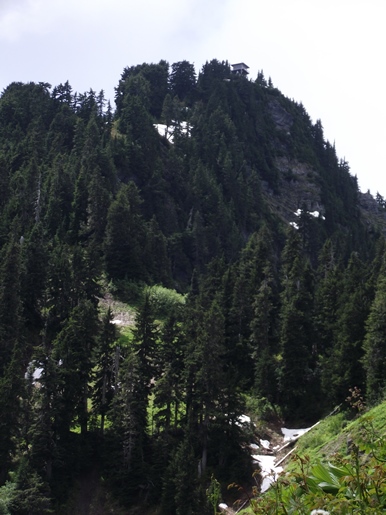 From this ridgeline the trail travels another 1.1 miles to reach the summit of Lookout Mountain. From the fire lookout hikers will enjoy spectacular views of Mount Baker, Mount Shuksan, Teebone Ridge, Hidden Lake Peak and Eldorado Peak. You should probably note that the national forest website warns that hikers should limit the number of people on the catwalk to just two per side in order to prevent them from collapsing. The original lookout was built in 1929, but was replaced in 1962.

Although this is a pretty good hike for the early summer season, I would highly recommend waiting to visit the North Cascades until at least mid-July so that you can enjoy some of the much better hikes this region has to offer. I would recommend looking into hikes such as the Maple Pass Loop, Cascade Pass / Sahale Arm, or Ptarmigan Ridge and Skyline Divide in the Mt. Baker area - among many others.