“Climbing higher for a still broader outlook, I made notes and sketched, improving the precious time while sunshine streamed through the luminous fringes of the clouds and fell on the green waters of the fiord, the glittering bergs, the crystal bluffs of the vast glacier, the intensely white, far-spreading fields of ice, and the ineffably chaste and spiritual heights of the Fairweather Range, which were now hidden, now partly revealed, the whole making a picture of icy wildness unspeakably pure and sublime.”

- John Muir on seeing Glacier Bay for first time in 1879

Without a doubt, Glacier Bay National Park and Preserve was the highlight of our entire cruise. After the photos and videos I saw prior to our trip, it was also the most anticipated. No doubt we were very blessed to have outstanding weather that day. Many of the ship crew members also commented how extremely lucky we were to have had such a glorious day, as this area is usually cloudy, and receives quite a bit of rain. 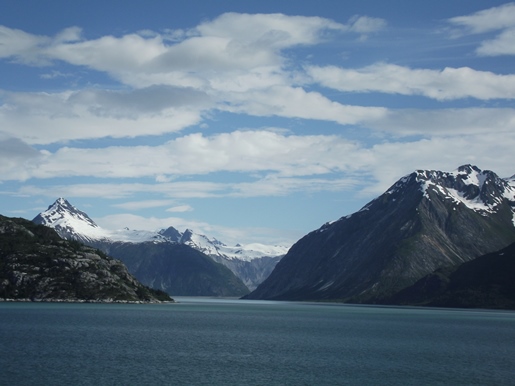 Our ship entered Glacier Bay around 6:00 AM on the 5th day of our trip. We stayed within the park boundaries for more than nine-and-a-half hours. Sometime during the wee hours of the morning a couple of park rangers boarded our ship. Throughout the day they gave presentations and answered a variety of questions from the passengers. They also helped with spotting wildlife as we made the roughly 65-mile journey to visit Johns Hopkins Glacier and Margerie Glacier.

Surprisingly we saw very little in the way of wildlife. We did see a bald eagle, porpoise, sea lion, harbor seal and a couple of humpback whales. I was hoping to see more, but that was fine, we were there for the scenery. Some of the other wildlife that thrive in and around the bay include minke and killer whales, sea otters, moose, black and brown bears, wolves, mountain goats, wolverines, lynx, as well as a wide variety of birds and waterfowl.


“The very thought of this Alaska garden is a joyful exhilaration. …out of all the cold darkness and glacial crushing and grinding comes this warm, abounding beauty and life to teach us that what we in our faithless ignorance and fear call destruction is creation finer and finer.”

John Muir made his first visit to Glacier Bay in 1879, only one year prior to the establishment of his beloved Yosemite National Park. Muir came to Alaska to learn about glaciers and how they shape the landscape. He believed that the Yosemite Valley had been carved by ice, and wanted to prove his theory by studying the glaciers in Alaska. At the time of his first visit the main glacier in Glacier Bay had already receded 45 miles up the bay, thus opening the bay to navigation, exploration and research for the first time.

In his 1915 book, Travels in Alaska, which was a collection of newspaper dispatches, lectures and articles, Muir began promoting Glacier Bay and the Inside Passage to the broader public. This led to President Calvin Coolidge proclaiming Glacier Bay a national monument in 1925. In 1980 Glacier Bay was elevated to a National Park and Preserve. In 1986 it was recognized as a Biosphere Reserve, and then was named a UNESCO World Heritage Site in 1992. 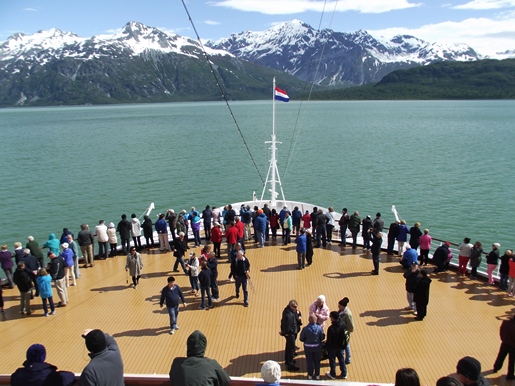 Today, the world's largest protected marine sanctuary also protects 16 tidewater glaciers and 30 valley glaciers within an area that encompasses 3.3 million acres. In all, there are more than 1000 glaciers in the park. The mountains surrounding Glacier Bay are some of the highest coastal mountains in the world, with the tallest peak in the park, Mount Fairweather, rising 15,300 feet above sea level. The stunning beauty of this park attracts roughly 450,000 visitors a year, with roughly 90% arriving by cruise ship. 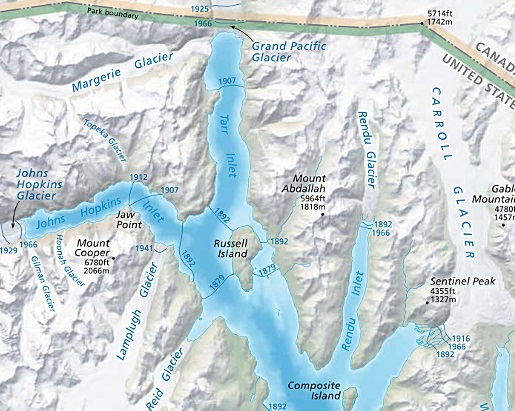 After a couple of hours of sailing we approached the end of the bay, passing Reid Glacier and Russell Island, just before reaching Johns Hopkins Inlet. Near the entrance to the inlet was the snout of Lamplugh Glacier, which stretches 16 miles south towards the Brady Icefield: 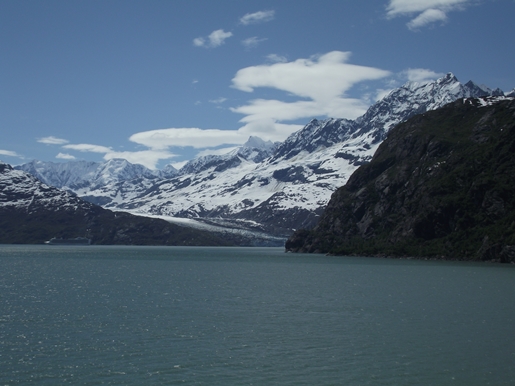 Topeka Glacier also comes into view near the entrance to the inlet: 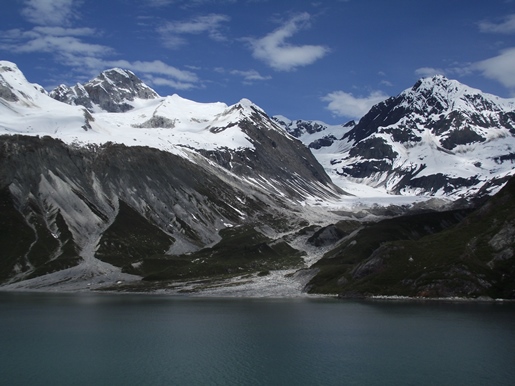 Once we rounded Jaw Point, a nearly 90-degree bend in Johns Hopkins Inlet, we could finally see Johns Hopkins Glacier at the head of the inlet. Our view was rather distant since the ship could only go so far into this fjord. From its source along the eastern slopes of Lituya Mountain and Mount Salisbury, the glacier extends for 12.5 miles before spilling into the bay. At its terminus the glacier rises 250 feet above the water, with another 200 feet submerged below: 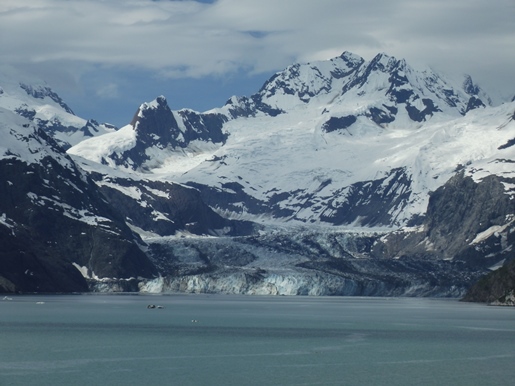 After making a 180-degree turn the ship began making its way towards Tarr Inlet. As we cruised towards the far end of this fjord we headed straight for Grand Pacific Glacier, which stretched just below the mountains across the border in Canada. Although 2 miles wide and 35 miles in length, Grand Pacific Glacier stands only 60 feet high: 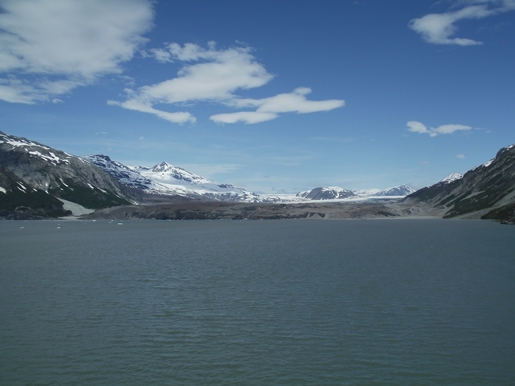 Our ship sailed all the way to the end of the inlet, just shy of where Margerie Glacier meets the sea. As we approached we were very fortunate to see some fairly significant calving. We also heard quite a bit of cracking and rumbling inside the ice as the ship got to within a quarter-mile of this massive glacier. At the point where it reaches the ocean, Marjorie Glacier is about a mile wide. From its source along the southern slopes of 12,860-foot Mount Root, the glacier extends for 21 miles before reaching the bay. It rises 250 feet above the water, with another 100 feet submerged below the surface: 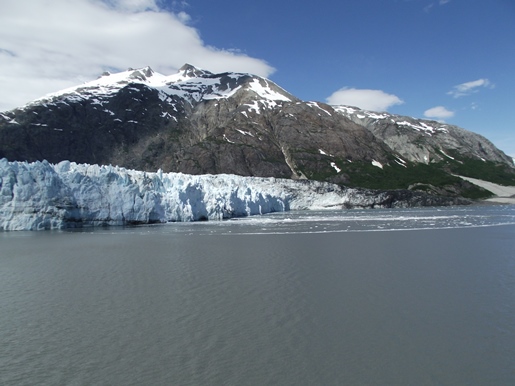 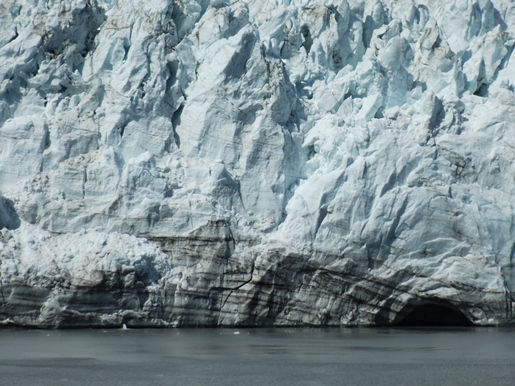 Margerie Glacier was once considered to be one of the most active glaciers in the national park, but has stabilized in recent years, and is neither advancing nor retreating. Johns Hopkins Glacier, on the other hand, is advancing at a rate of 10-15 inches per day. 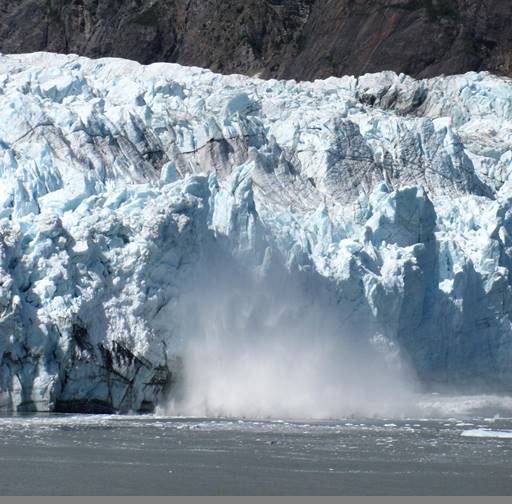 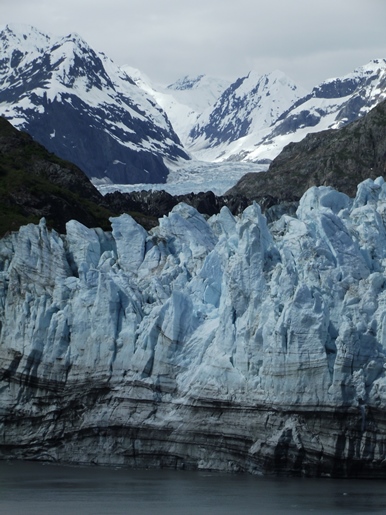 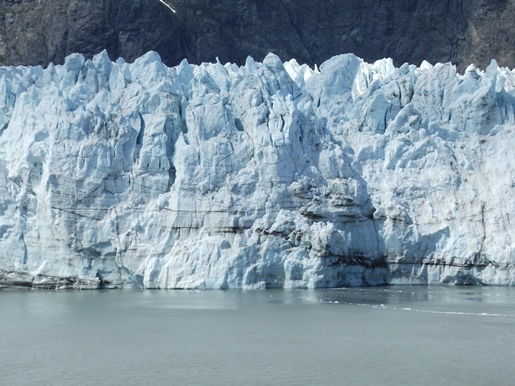 Glacier Bay is thought to contain some of the fastest moving glaciers in the world. According to the national park website the main glacier reached its maximum extent at the end of the Little Ice Age around 1750. At that time the glacier extended all the way into Icy Straight. However, when Captain George Vancouver sailed into the area in 1794, he and his crew described what we now call Glacier Bay as just a small five-mile indent in a gigantic glacier that stretched off to the horizon. By 1879 John Muir noted that the ice had retreated an additional 40 miles, and was in the process creating the bay. By 1916 the main glacier had melted back 60 miles to the head of what is now Tarr Inlet. Since then, over the last one hundred years, the glacier has retreated only an additional 5 miles. The park website also notes that some of the glaciers are retreating while others are advancing.

Indeed, Glacier Bay continues to be shaped by nature. Less than two weeks after our visit a massive landslide spread debris for miles across the Lamplugh Glacier. According to reports the rock face of a 4000-foot mountain, located between the Brady Icefield and Johns Hopkins Inlet, collapsed on a high, steep slope. Once the debris hit the glacier it kept sliding for roughly 6.5 miles. Scientists estimate that the landslide carried about 132 million tons of rock and debris – the equivalent of about 60 million mid-size SUVs - down the mountain and glacier. The Alaska Earthquake Center said the slide was the equivalent to a magnitude 5.5 earthquake. Although no one was around to see it, Paul Swanstrom, a pilot with the Mountain Flying Service, recorded the avalanche on video just two hours after the dust was just settling: