"There can be nothing in the world more beautiful than the Yosemite, the groves of the giant sequoias...our people should see to it that they are preserved for their children and their children's children forever, with their majestic beauty all unmarred"

Ever since the first Euro-American laid eyes on them in 1849, people from all over the world have been in awe of the giant sequoias in Mariposa Grove. To Frederick Law Olmsted, the famous landscape architect, the trees seemed like “distinguished strangers,” which had “come down to us from another world”. After visiting the grove in 1871, Ralph Waldo Emerson stated, “The greatest wonder is that we can see these trees and not wonder more.”

Without the help of people like Olmsted, Emerson, Galen Clark and John Muir, these ancient treasures may never have been preserved for the generations that came after them.

The Mariposa Grove of Giant Sequoias is located roughly two miles from Yosemite’s south entrance. Since this is the most popular destination outside of the Yosemite Valley, the parking area tends to fill-up relatively early in the morning. When this happens the park offers a free shuttle service that operates out of Wawona. If you arrive at the South Entrance intending to park at the trailhead, you may be greeted by a road block and a ranger explaining that the lot is full, in which case you’ll have to drive to Wawona to pick-up the shuttle, roughly 4 miles away.

Visitors to Mariposa Grove will have a variety of options in terms of what they want to see and how far they want to hike. The loop hike described here covers many of the most popular trees, including the Grizzly Giant and the California Tunnel Tree. 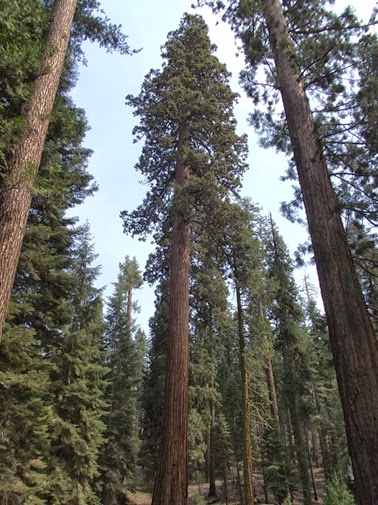 Many people will choose to do an out-and-back hike along the main trail in order to view only the main attractions. We saw quite a few people along this portion of the loop, but comparatively very few on the back half that circles around the west side of the grove.

If you choose to do the loop, most people choose to hike in a counter-clockwise direction. There are interpretative signs along the lower portions of the trail that allow for self-guided walking tours.

The first stop on this hike is just beyond the trailhead at the Fallen Monarch. Biologists estimate that this giant fell several hundred years ago. Its base reaches 15 feet across: 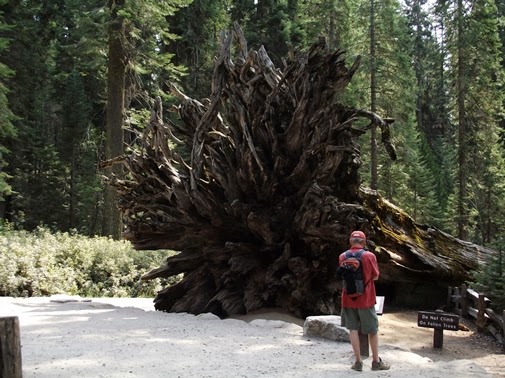 The trail continues on towards the Bachelor and Three Graces. The highest of the four trees in this group was measured to be 258 feet. It’s thought that the roots of all four trees are so intertwined that if one of them were to fall, it would likely bring the others down with it: 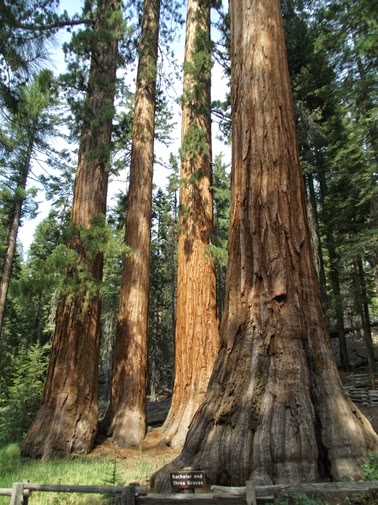 Roughly eight-tenths of a mile from the trailhead is the Grizzly Giant, one of the world’s largest trees measured by total volume. Estimated to be 1800 years old, it stands at 209 feet and has a circumference of 96 feet: 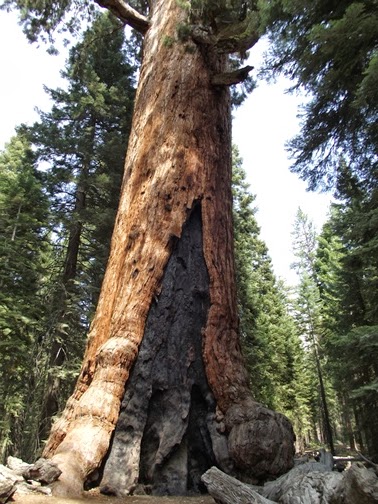 Unfortunately, hiking through the grove was a bit like being at a zoo. Most of the main attractions were fenced in, with people standing all around them. Although I completely understand why the fences were put in place, it just didn’t feel like the same wilderness experience we had at Stout Grove in Jedediah Smith Redwoods State Park, or Lady Bird Johnson Grove in Redwood National Park.

The roots of a giant sequoia are usually no deeper than six feet, but they fan out more than 150 feet in order to give the trees a stable base and provide balance for their massive trunks. Walking near the trees compresses the soil which can damage the fragile surface roots. 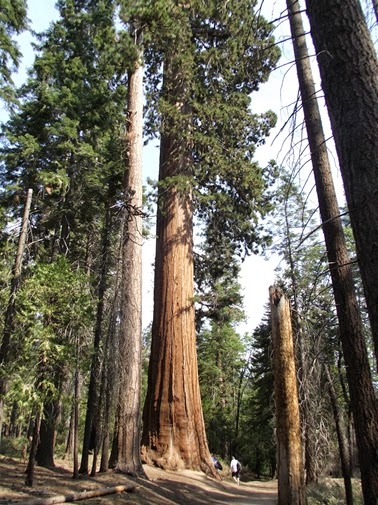 Although the oldest giant sequoias may exceed more than 3000 years old, they aren’t the oldest living trees. Some individual bristlecone pine trees are estimated to be more than 4600 years old. Despite some sequoias reaching a height of 310 feet, the tallest redwood in the world is almost 380 feet in height. However, when measured by total volume, giant sequoias are considered to be the largest living things on earth. Although giant sequoias were once found across much of the Northern Hemisphere, they now only survive in 75 isolated groves in California.

Mariposa Grove is the largest stand of giant sequoias in Yosemite. There are roughly 500 mature trees in this grove, with the tallest being about 290 feet. There are two other sequoia groves in Yosemite, including Tuolumne Grove and Merced Grove.

Roughly 50 yards away from the Grizzly Giant is the California Tunnel Tree. As a way of attracting visitors, the tree was cut in 1895 so that stagecoaches could pass through it: 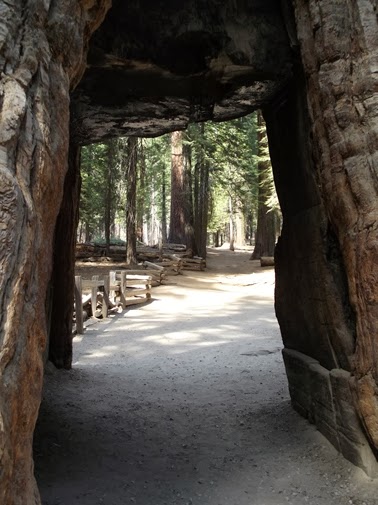 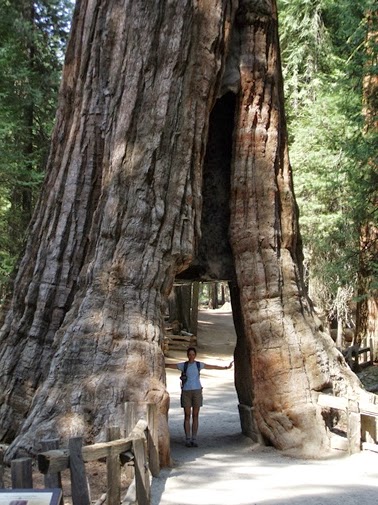 From the California Tunnel Tree the trail swings to the northwest. There are a couple of short, steep sections as you walk through the Grove. One particularly steep section is on the way to the Faithful Couple.

The Faithful Couple is a rare case in which two trees grew so close together that their trunks have fused together. Both trees are measured to be 248 feet in height: 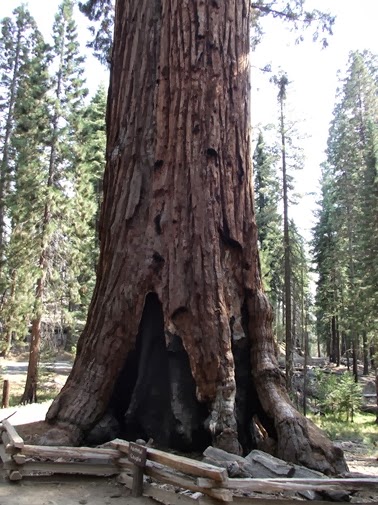 As we made our way back down to the trailhead we came across some huge sugar pine cones. Compare its size to that of a normal sized pine cone: 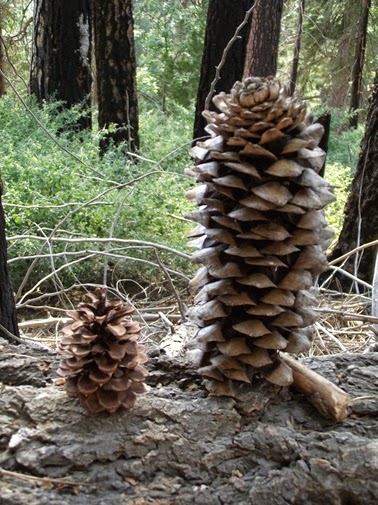 In all, this loop hike is roughly 2.75 miles in length, and climbs almost 500 feet. There are several trails in the grove that allow you to cut your hike short, or extend it all the way to the Upper Grove, or even to the Wawona Point Vista at an elevation of 6810 feet. 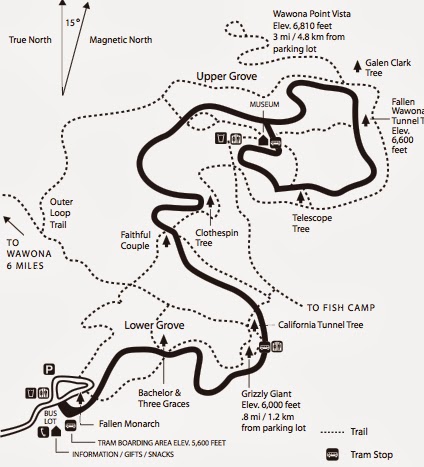 Visitors also have the option of taking The Big Trees Tram Tour, which is available on a first-come first-served basis only. Tours start every half-hour between 9:30 a.m. and 5:00 p.m.