One of the main objectives during our first trip to New Mexico in 2006 was to climb Wheeler Peak, the highest point in New Mexico. With a round-trip trek of 16 miles and a climb of almost 4000 feet, this would be the toughest hike either one us had ever attempted.

Located in the Carson National Forest, Wheeler Peak is about 90 miles north of Santa Fe in the Sangre De Cristo (Blood of Christ) range. To reach the summit we took the Wheeler Peak Trail (also known by locals as the Bull-of-the-Woods Trail), which begins from the Twining Campground at the Taos Ski Area.

Since Kathy and I were climbing in late May, there were still a few snow covered areas on the trail. In fact, we were warned that there would be a section of trail below tree-line where we would most likely run into some problems. Although that section still had quite a bit of snow, we were able to pass through it with only a little extra work. 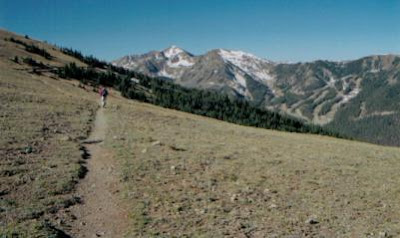 From the Taos Ski Area the trail proceeds in a northeasterly direction along an old road to the Bull-of-the-Woods Meadow, roughly 2.25 miles from the trailhead. Near the pasture the trail intersects with the Gold Hill Trail. Hikers should stay on the main trail, which now makes sharp turn towards the southeast, and begins climbing the western slopes of Bull-of-the-Woods Mountain. You may want to note that while hiking in this area you're on private land.

The trail then ascends 12,163-foot Frazer Mountain where you'll have commanding views of Wheeler Peak and the La Cal Basin. Once atop Frazer Mountain you'll be in the Wheeler Peak Wilderness. This 19,661-acre wilderness area is home to bighorn sheep, elk, mule deer, marmots, pikas and golden eagles.

Just beyond the summit of Frazer Mountain we reached a snow field, roughly a half-acre in size. Instead of walking around it, we decided to walk on top of it, as it seemed to have a pretty firm crust. We were almost to the middle when I made the mistake of walking a little too close to Kathy, which created too much weight within a small surface area, and I broke through the crust. A little shocked at the suddenness of it all, I found myself waist deep in snow. Lesson learned!

From here the trail drops roughly 400 feet into La Cal Basin. If backpacking, this area makes for an outstanding camping spot.

From La Cal Basin the trail climbs almost 1400 feet to reach Mount Walter. At 13,133 feet, Mount Walter is the second highest named summit in New Mexico. However, it’s not usually considered an independent peak because it has less than 30 feet of topographic prominence. From here the path leads you along a fairly narrow ridgeline to your final destination, still a little more than half-mile away. It was here that we experienced some extremely high winds. As a precautionary measure I held onto Kathy just to make sure she didn’t get blown off the mountain! Other than the wind and some relatively cool temps at the top, the weather was otherwise quite perfect. 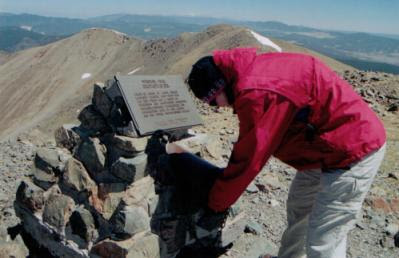 Wheeler Peak is named for U.S. Army Major George M. Wheeler who surveyed much of New Mexico in the late 1870s. A plaque at the summit reads as follows:


Named in honor of Major George Montague Wheeler (1832–1909) who for ten years led a party of surveyors and naturalists collecting geologic, biologic, planimetric, and topographic data in New Mexico and six other southwestern states.