Roughly 45 miles northwest of Santa Fe are the ancient ruins and deep canyons of Bandelier National Monument. Designated as a national monument in 1916, Bandelier preserves the homes of the Ancestral Pueblo people.

Archeological surveys show that the Ancestral Pueblos began building permanent settlements in Bandelier by 1150, but had moved to new homes along the Rio Grande by 1550. The main portion of the park, in Frijoles Canyon, contains a number of ancestral homes and dwellings, kivas (circular, half-buried ceremonial structures), rock paintings and petroglyphs.

The last time we visited Bandelier we spent most of our time in Frijoles Canyon. This time we decided to venture a little further out and hike the Cerro Grande Route, a trail located in the fairly isolated northwestern corner of the park. This “Route” offers a much different experience as compared to the rest of Bandelier. Instead of canyons and deserts, the trail explores the subalpine and montane forests of the Jemez Mountains.

Destination for the “Route” is the top of Cerro Grande Peak, Spanish for “Big Mountain”, which at 10,199 feet in elevation is the highest point in the park. The path alternates through open meadows, aspen groves and pine forests. Even in mid-September we still saw a wide variety of wildflowers. 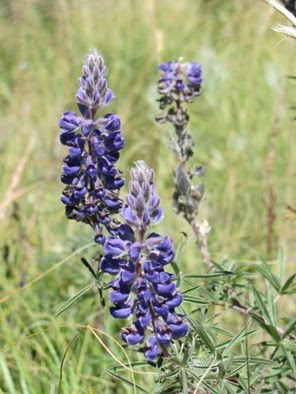 Through the first sections of the hike we noticed a fair amount of evidence of the Cerro Grande Fire that burned roughly 48,000 acres in 2000. The fire started as a controlled burn by the Forest Service, but high winds blew the fire out of control, and eventually destroyed 235 homes in the Los Alamos area. By no means, however, does the fading damage detract from the sublime beauty of the hike.

Be sure to keep an eye out for elk, in addition to the mule deer and pikas we saw along the way.

Most of the climbing comes in the last three quarters-of-a-mile or so. The hike ends at a fairly open meadow at the summit of the peak (which would be called a bald if it were in the Southern Appalachians). From the top you can see the Valles Caldera, the Sangro de Cristo Mountains and the Sandia Mountains. Due to a few trees at the summit, however, the views are much better just a couple hundred feet below the top of the mountain. 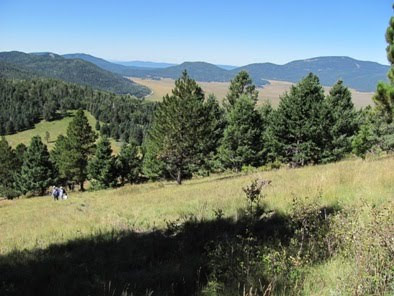 Cerro Grande Peak forms part of the rim of the Valles Caldera, a twelve-mile-wide crater that formed when the earth collapsed after a catastrophic volcanic eruption took place here roughly 1.2 million years ago – a geological event very similar to how Yellowstone was created. The eruption was so powerful it pushed out 150 cubic miles of lava, and shot ash as far away to what is now Iowa.

The prominent valley that dominates the view from the top is known as the Valle Grande. In the center of the caldera, and on the far end of the Valle Grande, is Redondo Peak, which, geologically speaking, is a volcanic resurgent dome. Although no longer active, it was formed roughly 70,000 years after the main caldera-forming eruptions occurred. 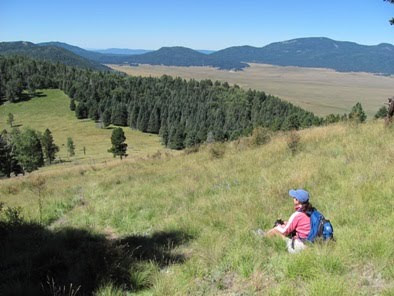 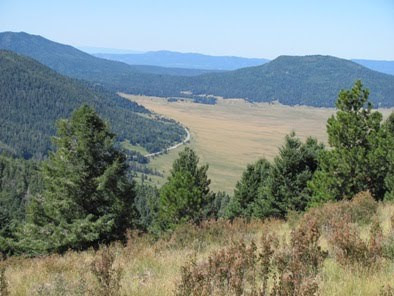 Several movies have been shot in and around the Valles Caldera, including The Gambler, Buffalo Girls, Last Stand at Saber River, The Missing and most recently, Seraphim Falls, which starred Liam Neeson and Pierce Brosnan.

In 2011 another wildfire scorched much of this area after a large aspen tree fell on a power line on nearby private land. The Las Conchas Fire, the largest wildfire in New Mexico history, burned a total of 154,349 acres in Bandelier, the Valles Caldera National Preserve and the surrounding Jemez Mountains. In Bandelier itself, 20,798 acres, or 62% of the park was burned.

A Guide to Bandelier National Monument - More than a guide, this book includes a 38 page introduction which gives a brief description, from prehistory, European arrival, to the WWII era and its aftermath. Dorothy Hoard's use of photographs, and cleanly drawn hand sketches to show Bandelier's trails, from the Visitor's Center trailheads, State Road 4, St. Peter's Dome, and Eagle Canyon Pumice Mine trailheads. Dorothy gives the avid trail hiker, and the armchair nature enthusiast a clear idea of what the landscape holds, plus plenty of regional flavor sprinkled in with historical facts and information.