We’d seen the huge sign posted just off I-70 near Manhattan, Kansas for many years now. So, on this trip, with a little bit of extra time on our side, we finally decided to stop in and check it out.

The Konza Prairie is an 8600-acre tract of native tallgrass prairie that was set aside as a preserve by the Nature Conservancy in 1977. Today, the land is also used as a long-term ecological research site by Kansas State University.

The preserve invites members of the public to hike one of the three scenic loop trails on the property located in the heart of the Flint Hills. Hikers have a choice of 2.5, 4.4 or 6.0-mile loops that take visitors across virgin tallgrass prairie, as well as atop limestone-capped hills overlooking the property and surrounding farms.

There are more than 600 species of plants on the prairie, but the most dominant plants at Konza are the many varieties of grasses. In the fall of a favorable year, big bluestem grass can grow as high 10 feet. Although wildflowers were still abundant during our mid-September visit, they usually reach peak bloom in May and June. 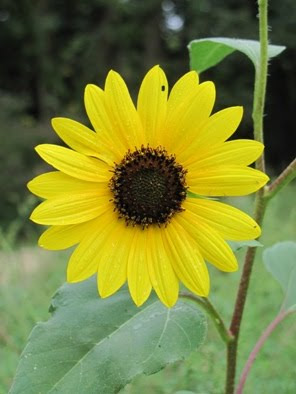 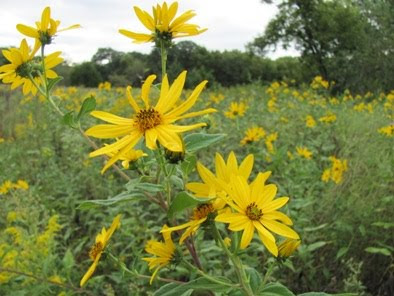 The Konza Prairie is also home to 40 mammals, and more than 200 species of birds. In addition to several turkeys and the deer we saw, we think we spotted a small herd of buffalo in the far off distance. The biological station manages roughly 300 head of bison in order to study the role of grazing on the ecology of the tallgrass prairie.

Also located along the trail are the remains of the old Hokanson Homestead. Built by Swedish settlers in 1878, the homestead features the remains of foundations, a wildlife observation lean-to, as well as an original limestone barn: 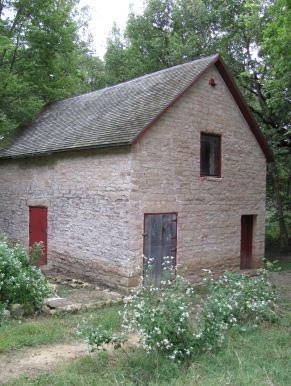 Hikers will also find several scenic vistas of the Flint Hills and the Kansas River Valley from various locations along the trail: 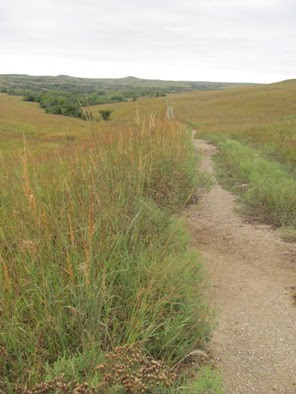 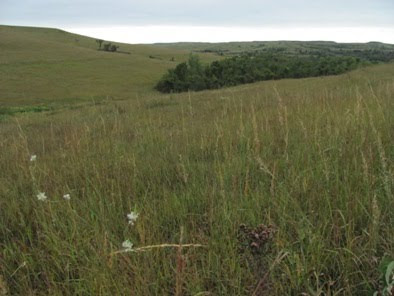 Konza is well worth a stop if you’re passing though and have an extra 2 or 3 hours. The prairie is located roughly 4.9 miles north of I-70, off exit 307, on McDowell Creek Road (also identified as Riley County 901).

Driving Across Kansas - Guided by authors Ted Cable and Wayne Maley, the historical landscapes of I-70 come back to life, recalling landmarks and legacies relating to pioneer movements and Indian dispossession, army outposts and great bison hunts, cowboys and cattle trails, the struggles over slavery and women's rights, and the emergence of major wheat, beef, oil, and water industries.Their guide parcels out information, mile-marker by mile-marker, in a way that's equally accessible to westbound and eastbound users alike.