“Shut in by sublime Yosemite cliffs, nobly sculptured, and adorned with waterfalls and fringes of trees, bushes, and patches of flowers, but amid so crowded a display of novel beauty it was not easy to concentrate the attention long enough on any portion of it without giving more days and years than our lives can afford.”

I must admit I was quite disappointed. After boarding the high-speed catamaran we learned that Tracy Arm was impassable due to too much floating ice. Instead, we were going to visit Dawes Glacier in nearby Endicott Arm. However, once we arrived at the glacier at the end of the fjord there was no longer any disappointment on my part. It was absolutely spectacular!

As the ms Nieuw Amsterdam cruised up Stephens Passage, heading towards Juneau, it stopped in mid-ocean to allow our excursion group to board the catamaran. This transfer occurred just outside of Holkham Bay, which marks the split between the Tracy and Endicott Arm Fjords. Instead of taking a left into Tracy Arm, we turned right into Endicott Arm. As we sailed through the bay we could see quite a bit of ice floating out of Tracy Arm. 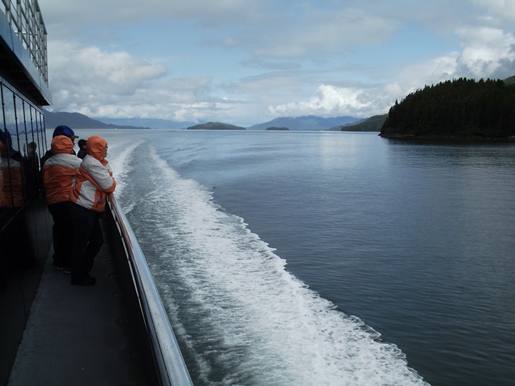 The Endicott Arm Fjord marks the southern boundary of the Tracy Arm-Fords Terror Wilderness area within the Tongass National Forest. It’s located about 45 miles south of Juneau, Alaska. Designated by Congress in 1980, the Wilderness contains 653,179 acres, and includes two deep and narrow, glacially-carved fjords. Both fjords are more than 30 miles in length. At the head of each is an active tidewater glacier, which frequently calve large icebergs during the summer months, some as large as three-story buildings. Some say that the Tracy Arm–Fords Terror Wilderness encompasses terrain and scenery that rivals Glacier Bay National Park. I would say it's close... 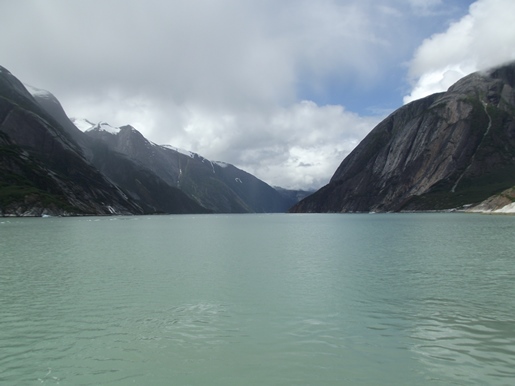 Weather-wise, our luck continued this day. The forecast for Juneau on this day called for a 100% chance of rain. Although we did see a few of sprinkles of rain and sleet, which lasted less than 10 minutes, the weather otherwise was absolutely spectacular. I even got a sun burn, which was the last thing I expected to get in Alaska - especially when you consider that this part of the state gets some precipitation on roughly 222 days per year! 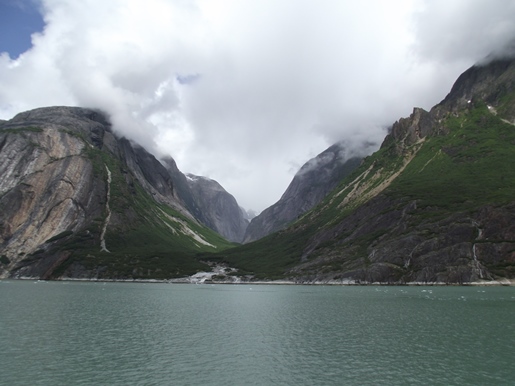 During our 31-mile journey to the end of the fjord we saw quite a bit of wildlife, including a brown bear, a bald eagle, sea ducks and several humpback whales. Visitors to the area may also see black bears, wolves, mountain goats, deer, moose, Arctic terns, pigeon guillemots and orcas. Endicott Arm is also one of the largest breeding grounds for harbor seals in the world. 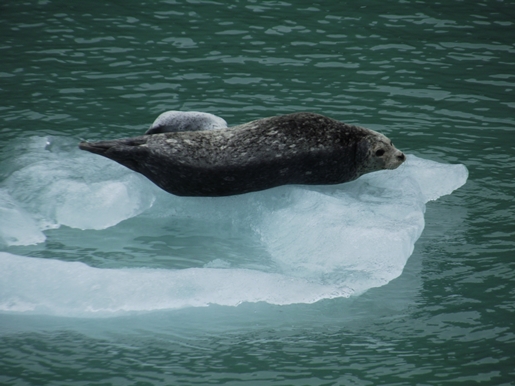 Visitors will also see several waterfalls crashing down the steep cliffs of the fjords: 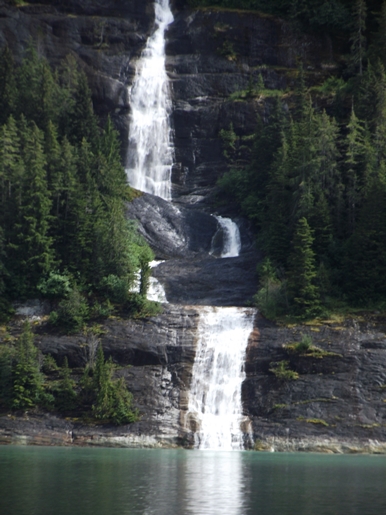 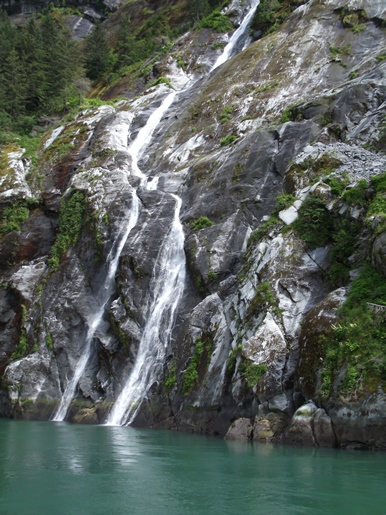 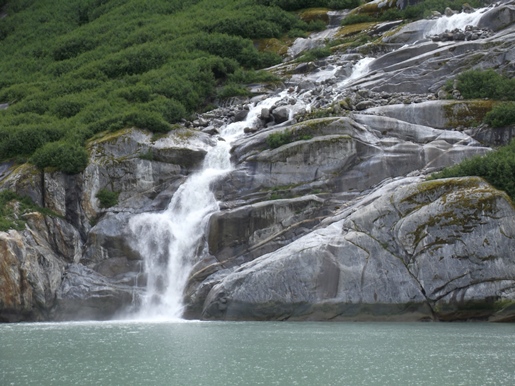 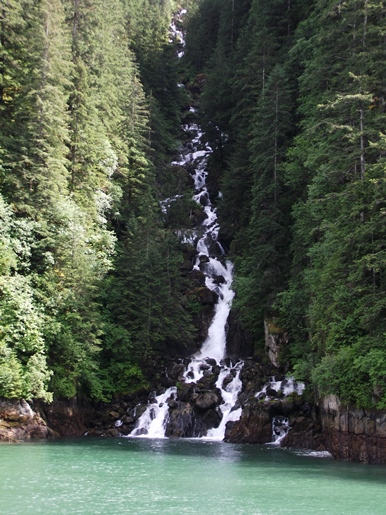 As already mentioned, at the end of Endicott Arm is Dawes Glacier, a wall of ice roughly 600 feet in height, and a half-mile in width. 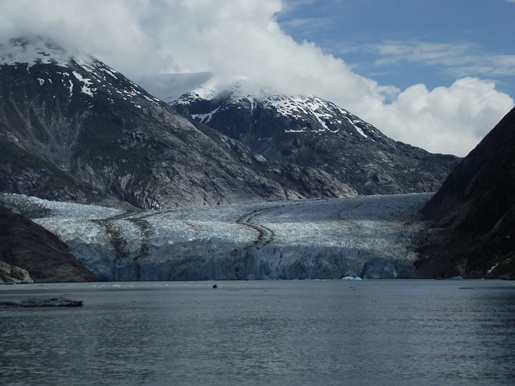 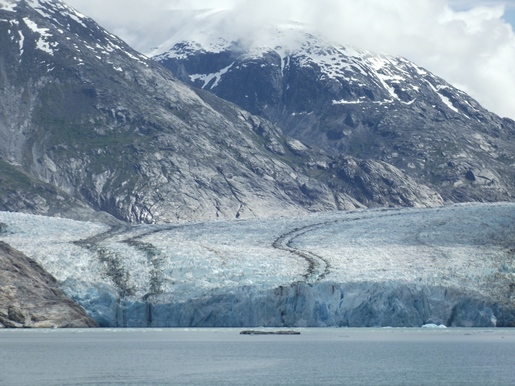 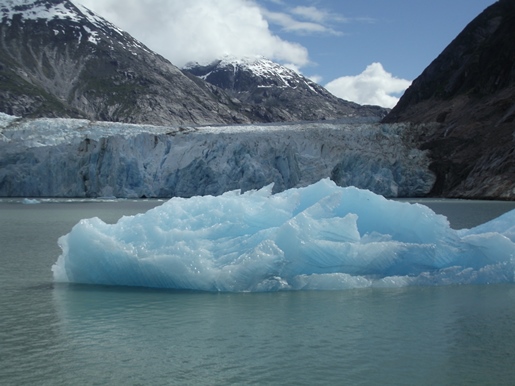 Though my photos don’t do it justice, the deep azure blue of the ice was simply amazing to see in person. 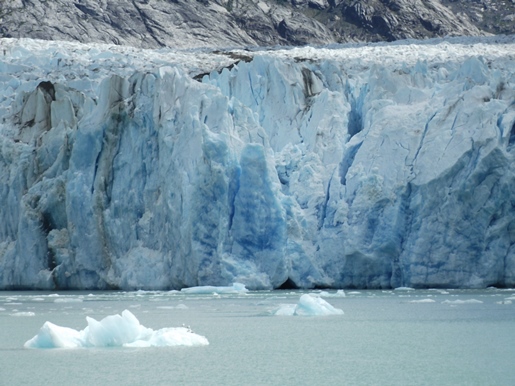 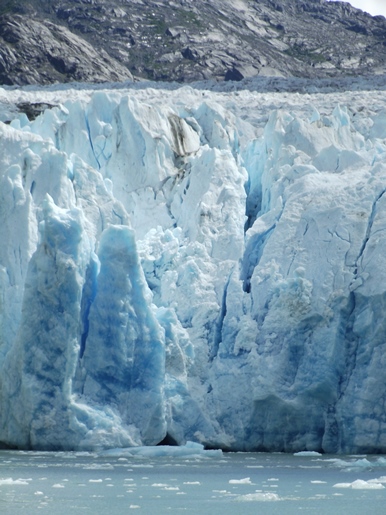 If you ever get a chance to visit this part of Alaska, I would highly recommend taking this tour in a heart beat.