The main objective during our stay in Flagstaff in September of 2012 was to hike to the summit of Humphreys Peak, the highest point in Arizona. The peak stands prominently in the northern part of the state, and can be seen for miles in any direction, including this view from our hotel: 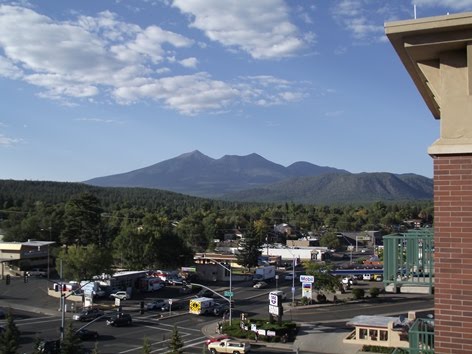 The peak is situated next to Arizona Snowbowl, an alpine ski area….in Arizona! The trailhead is located near the upper lodge, and the path crosses over one of the ski runs before entering the Coconino National Forest. Due to construction in the upper parking area, we had to start our hike from the lower parking lot, which added roughly 0.75 miles to our overall mileage.

The construction project, which we learned later, was part of a highly controversial plan for Arizona Snowbowl to use treated wastewater on its slopes when blowing artificial snow. At the heart of the issue is finding precious water resources to use for recreational purposes in the middle of the desert. To solve the problem Arizona Snowbowl will become the first ski resort in the world to use 100% treated wastewater to make artificial snow during the 2013 winter. Both environmentalists and Native Americans are at odds with this decision.

The weather on the morning of our hike gave a small hint to the approaching ski season. We noticed a little bit of frost on the ground and in the trees around the trailhead.

The first 3.5 miles of the hike travels along a very rocky and rugged path, while passing through a thick forest of aspens and pines. The trail climbs steadily on a moderate to moderately strenuous grade throughout the early portions of the hike.

At 11,400 feet, a point marked by a national forest sign, the trees begin to thin out and you’ll begin to enjoy some views of the ski area and the western suburbs of Flagstaff. Beyond this point the trail becomes noticeably steeper as it begins climbing a series of short switchbacks.

At 3.9 miles we finally crested the saddle between Humphreys Peak and Agassiz Peak, and had our first grand panoramic views of the area. At this point we were finally above of the treeline, and had entered the tundra zone, which is kind of strange saying that when you're in Arizona.

Once on the saddle the trail travels over a rocky and barren terrain, which is actually volcanic rock. Some sections of the trail are somewhat faint and difficult to read, but the route is marked with wooden guideposts. For the most part this is a fairly safe hike. I wouldn’t say there isn’t any exposure at all to any steep drop-offs, but it's pretty negligible. 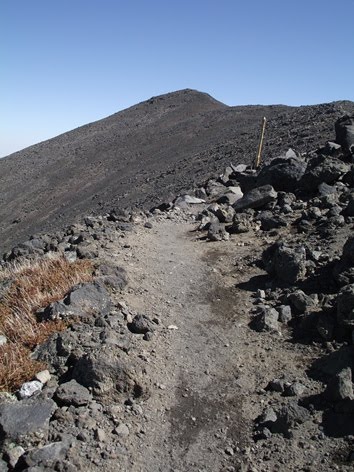 As you proceed to the top there are three false summits you’ll have to contend with. 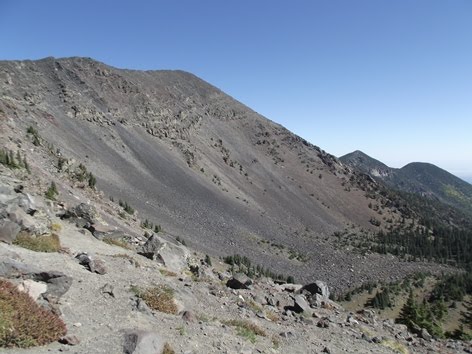 It’s highly recommended that you bring a rain jacket and/or wind breaker. The mountain is notorious for having very high winds, and there’s always a chance of an afternoon thunderstorm. 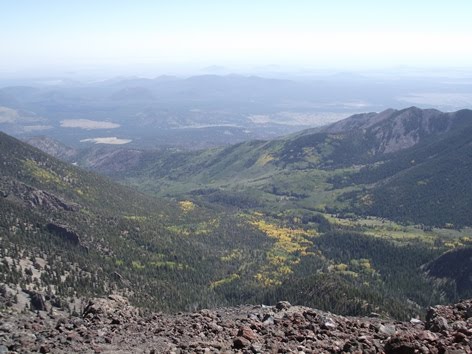 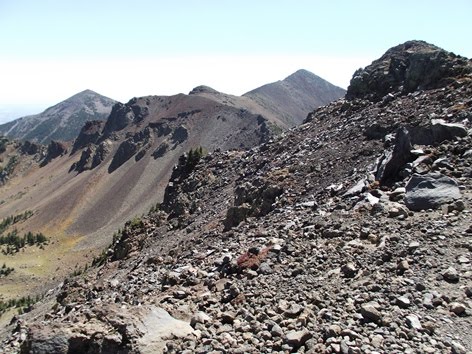 From the top you can almost see forever in any direction, including the north rim of the Grand Canyon - roughly 64 miles away! Unfortunately, with smog blowing in from Los Angeles, it was pretty hazy that day so we were barely able to see it. Towards the northeast is Sunset Crater and the Painted Desert, and towards the west is Kendrick Peak, one of many volcanic calderas that can be seen from the summit: 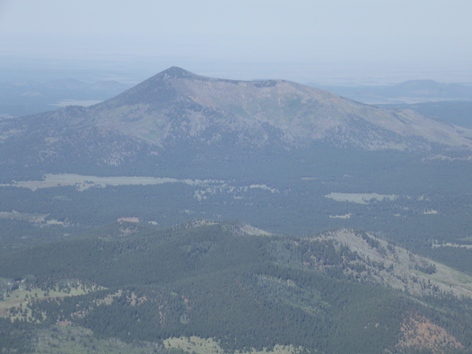 Humphreys Peak is the highest mountain in the San Francisco Peaks, all of which are extinct volcanic peaks. Its smaller neighbor to the south is Agassiz Peak (below), the mountain on which Arizona Snowbowl is located. Geologists say that at one time, before the volcano erupted, Agassiz and Humphreys were actually one mountain. They estimate that the peak reached a height of more than 20,000 feet. 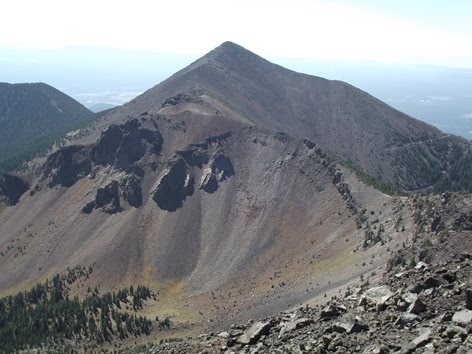 We were pretty fortunate to have only a little wind on the day of our summit. As we stood there at the top we did have one strong gust that lasted for about 30 seconds or so. Three times within that short time period a small vortex had formed. Each one lasted only a second or two, but each made an audible whooshing noise, and were made visible by the dust they kicked-up.

You see some strange stuff at state high points: 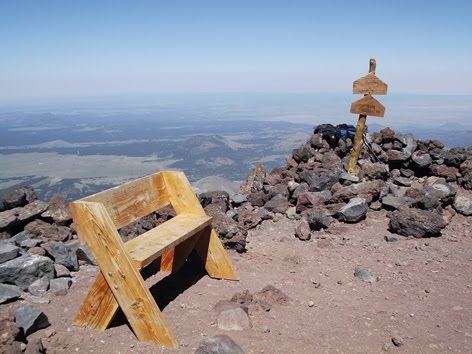 Humphreys Peak is named for General Andrew A. Humphreys, a Union general during the Civil War, who later would become the Chief of Engineers for the U.S. Army Corps of Engineers.

After our hike Kathy and I went to the 1899 Bar and Grill in Flagstaff and chowed down on some of the best Buffalo wings we’ve ever had. They were made with tequila and achiote, a seed from a flower imported from Brazil that gave the wings a completely unique taste. They were then topped with picante sauce and served with a jalapeño cream sauce. Several of the entrees served in the restaurant were also made with achiote. Along with some great local brews, I highly recommend stopping at this local restaurant if you’re ever in town. If you wish to try the spice at home you can also order it from the Flagstaff Farmers Market.