At the northern end of the Guadalupe Mountains in New Mexico, and lying more than 750 feet below the surface of the ground, is Carlsbad Caverns National Park.

Ansel Adams once said that Carlsbad Caverns is “something that should not exist in relation to human beings. Something that is as remote as the galaxy, incomprehensible as a nightmare, and beautiful in spite of everything.”

Will Rogers called it the "Grand Canyon with a roof on it".

After taking the 75-story elevator down to the lunchroom area, my wife and I began our self-guided tour of the Big Room.

A one-mile paved loop guided us around the perimeter of the natural limestone chamber. The appropriately named "Big Room" is roughly 8.2 acres in size, making it one of the largest chambers in the world. Put another way, you could fit almost 6.2 football fields within the chamber!

During our “hike” we encountered the most park rangers I’ve ever seen on one trail. Mainly to ensure that no one gets off course, or tries to damage or steal any part of the cave, the rangers were also there to answer any questions you might have along the way.

Even in the heat of summer you may want to take a jacket or sweater with you. The cave has a constant year-round temperature of 56 degrees.

Although the NPS did a great job of using front and back lighting to highlight the caves most interesting features and formations, I still had trouble getting good photos with my camera. Here are a couple of the better ones that turned out relatively decent: 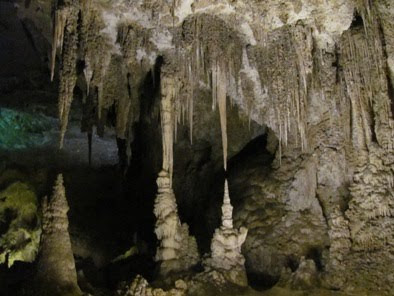 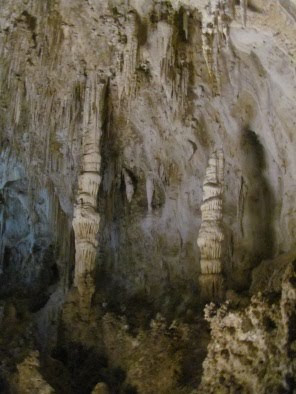 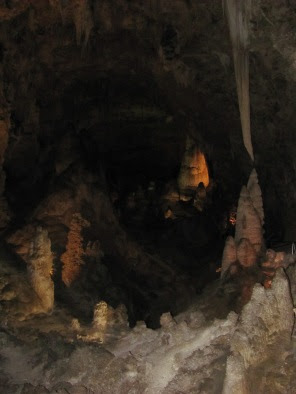 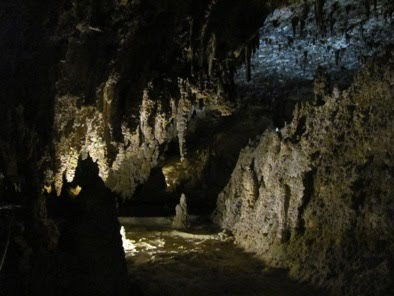 Even Kathy, who doesn't particularly like caves, thought the tour was well worth it.

One other tidbit about Carlsbad Caverns you may find interesting: More than a quarter million Mexican free-tailed bats spiral out of the Natural Entrance each evening during the warm months of the year in search of moths and insects. It’s one of the leading spectator attractions for many visitors. The best bat flights normally occur in July and August. At this time baby bats, born in early summer, join the flight along with migrating bats from colonies further north. This NPS Photo by Nick Hristov gives you an idea of what the scene looks like:

By the way, if you happen to suffer from chiroptophobia, or the fear of bats, don’t worry - very few bats, if any, ever make it to the Big Room. 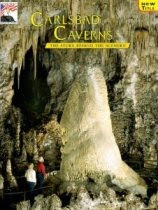 Carlsbad Caverns: The Story Behind the Scenery - The story of Carlsbad Caverns National Park is actually the story of two parks: the one park visitors see on the surface and the one they see underground. The pitch-black underground is as different from the bright sun and blue sky of the surface world as the plants and animals of the Chihuahuan Desert are different from the rocks and minerals of the Cavern.